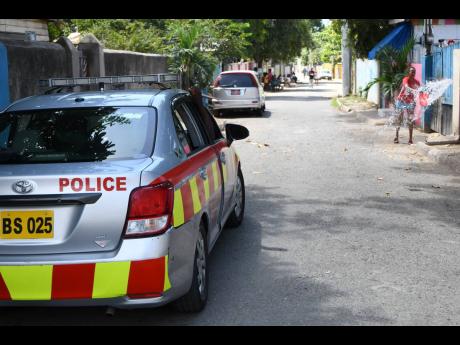 Mark* is considering himself blessed after he narrowly escaped being shot in an incident that claimed the lives of three men on Howard Avenue, also known as Mongoose Town, St Andrew, on Sunday.

“Me stand up with me friend dem and me just see the car pull up and a man stretch him hand over the door and start fire and me friend push me. Then me get up and start run and me hear rapid burst back a me but a pumpkin vine trip me, a so me get fi escape the bullet them,” he told THE STAR.

“A just God save me man and because right now me could a be a dead man because when me a lay down a next man run pass me who get shot and him dead.”

His only injuries are a swollen finger and shoulder bruises from a fall.

“Me nah lie me think me did get shot because me get up and run go round a me people them yard and tell them me get shot, but a just me shoulder did slip out,” he said.

Reports are that about 7 p.m., a group of men was sitting along the roadway when they were pounced upon by gunmen travelling in a Nissan AD motor car. The men opened gunfire and five persons were hit. The injured were transported to hospital where three were pronounced dead and the other two admitted. The deceased have been identified as Keno ‘Spoogy’ Morgan, Nava ‘Wackie’ Samuels and Konroy Wright. Mark remembered Morgan and Samuels as hard-working young men.

“Me two friend them innocent. All them do is go from work to home. Everything that is good me can say ‘bout them and them man deh always a run joke and make fun,” he said.

Samuels’ mother, Leonie Campbell, said he is the second child she has lost to bullets.

“We are taking his death very hard because is not like he was in a fight and died. He was just hanging out and them come take him life like that,” she said. “We shared a very good relationship because he is my last child and more like the baby.”

One resident told THE STAR that the past few months have seen peace and merriment in the community.

“No war nah gwan round here round here. Everybody happy and a live good so me nuh know where this a come from, the whole place in a mourning now. A bare screaming and bawling from last night (Sunday); it terrible man,” the resident said. “Right now me mind just all over the place. Me a wonder if me wah move out or wah because it nuh pretty over here.”