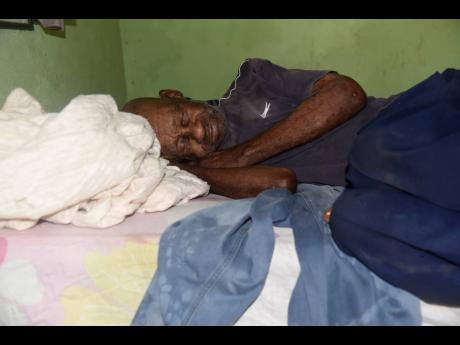 Omroy Harrison, the Guys Hill, St Catherine elder whose living conditions were highlighted in THE WEEKEND STAR, is now in a better place.

Shortly after the story was published, Harrison's relatives rescued him from the dilapidated house.

"His family came up and take him over, and I know they will take care of him from there on. It was the Sunday after the story published, his nephew came and pick him up," said Omroy's neighbour, John Duglas.

Omroy's younger brother, Moral Harrison, had reached out to THE STAR, refuting claims made by Duglas that the family had abandoned him.

Harrison said that the family has been paying for Omroy's care for many years to different people at different points in his life, most recently to a woman who, unfortunately, became ill.

State of our family

"Neither her nor her family reached out and told me about his state, or the state of our family home," he said. Harrison said Duglas was asked to step in by the woman, but questioned why he did not contact the family.

"Even though we felt the current carer was doing a good job, again no contact was made to explain the situation," Harrison said.

Harrison said that Omroy has mental health issues that occurred after contracting typhoid when he was young.

"His mental capabilities dramatically changed and never recovered. He cannot read or write or take care of daily needs, but (is) otherwise physically fit and healthy," he said. "He can walk many miles still to this day, but, unfortunately, lacks the ability to keep house, as most people at his age probably cannot do, regardless of his mental health."

Harrison also said that Omroy always wanted to stay in the family home and as a family. "We always felt it was better for his memories and his mental health."

"But, unfortunately, he has been subjected to scams and trickery while his family resides abroad," he said. "He is also the subject of a poor welfare system in Jamaica that needs to be greatly reformed."

Duglas thanked THE STAR for highlighting Omroy's story. "I am happy and so proud of what was done in the sight of God, and he should heal over time," he said.