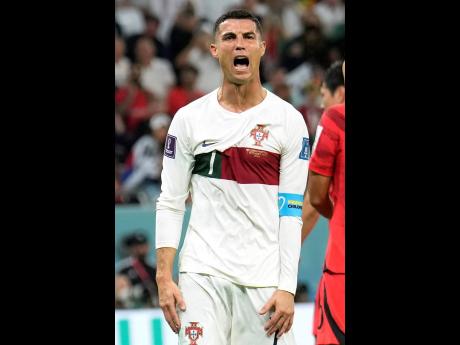 Cristiano Ronaldo was the usual hot topic at Portugal's pregame news conference at the World Cup yesterday -- though the issues were hardly positive for his veteran coach to handle.

Rumours of the star player sealing a transfer to a Saudi Arabian club. Fallout from Ronaldo's body language on being substituted last week. A poll at home suggesting most fans don't want him in the team ahead of playing Switzerland in the round of 16 today.

Two of those subjects were swatted away by Fernando Santos, who has coached Portugal and coaxed his star player for more than eight years now.

"I don't really know about this, to be honest," Santos said about a Spanish media report that Ronaldo will sign a much-speculated deal with Saudi club Al Nassr after being cut loose by Manchester United. "That's his decision, that's what he has to deal with."

On the subject of Portuguese daily O Bola's poll: "I'm not paying attention to polls or any other type of this news."

The question of Ronaldo's body language, however, on being substituted midway through the second half of a 2-1 loss to South Korea on Friday moved Santos to assert his authority.

"I didn't like it, not at all. I really didn't like it," Santos said, through an interpreter, about images he hadn't seen during the match. "We fixed that in-house and that's it."

When asked if he still trusted his captain, Santos again showed who was boss in the Portugal camp.

"I only decide who's going to be the captain when I reach the stadium. I don't know what the line-up is," the coach said, insisting that was consistent with how he always communicated with his team.

Santos gave his explanations sitting beside defender Ruben Dias, who had earlier appealed to the Portuguese media to help "create unity" in the camp instead of division.

At a World Cup where Kylian Mbappe is the top scorer and Lionel Messi has been thrilling fans with his goals and dribbles, the narrative around one of the other superstars in Qatar has been less smooth.

OK, he's broken a tournament record by becoming the first player to score a goal at five World Cups, but since converting that penalty in Portugal's opening game, Ronaldo has had a rather quiet time on the field.