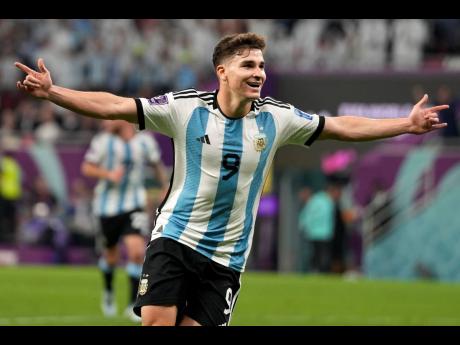 Argentina’s Julián Álvarez celebrates his goal during the World Cup round of 16 football match against Australia at the Ahmad Bin Ali Stadium in Doha, Qatar on Saturday. Álvarez scored the winning goal in Argentina’s 2-1 victory.

This season has been quite an education for Julian Alvarez.

From being the understudy to Erling Haaland in his first year at Manchester City to being the sidekick to Lionel Messi for Argentina at the World Cup, Alvarez is learning from the biggest stars in football.

He's on the path to becoming one himself.

Two starts, two goals. How about that for your first World Cup?

As someone who once scored six goals in a single match in the Copa Libertadores, the 22-year-old Alvarez seems born to deliver on the big stage.

At the World Cup, he's living out his dream, playing alongside Messi, one of the game's all-time greats, in front of fans who are making more noise than any other travelling contingent in Qatar.

"A huge joy," Alvarez said after Argentina's 2-1 win over Australia in the round of 16 on Saturday.

"I always try to give my best to help from wherever I play. On the field or being on the bench cheering on my teammates. We are going to go down this path to continue making Argentines happy."

Alvarez has profited from fellow striker Lautaro Martinez's failure to establish himself as the starting centre forward for Argentina. The difference in the two players' form was all too apparent against Australia.

While Martinez fluffed two big chances late in the game after coming on as a substitute, Alvarez, the man he replaced, scored with his only real opportunity. The goal summed up the type of player he is, and why he is already so treasured by Argentina's passionate fans.

Allied to his lethal finishing is a relentless work ethic that was demonstrated when Alvarez closed down Mathew Ryan as the Australia goalkeeper dallied on the ball inside his area. Also under pressure from Argentina's Rodrigo De Paul, Ryan took a second touch that was far too heavy and Alvarez nipped in to take the ball off him and shoot on the turn into an unguarded net.

The goal couldn't have been more different to his first at the World Cup, a curling shot into the far top corner at the end of a sweeping 25-pass move.

Tap-ins, curlers, link-up play, intense pressing. It's no wonder City manager Pep Guardiola rates Alvarez highly enough to make him the second striker in his squad to Haaland, to such an extent that Guardiola was happy to offload Gabriel Jesus and Raheem Sterling during the last off-season.