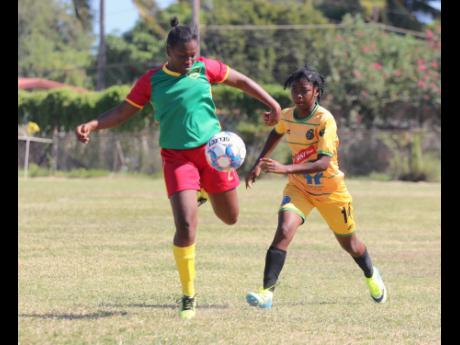 Real MoBay AFC player Zenesha Williams (left) gets ready to make a clearance ahead of a challenge by Vere United’s Jully-Ann Howard during their Jamaica Women’s Premier League (JWPL) encounter at the Wembley Centre of Excellence yesterday. Vere won 11-0.

Coaches Dwight Smith of Vere United and Marvin Peterkin of Real MoBay believe the island's overall programme will be the winner on the resumption of the Jamaica Women's Premier League (JWPL) yesterday.

Vere hammered Real MoBay 11-0 at the Wembley Centre of Excellence with the huge margin being almost immaterial for both Smith and Peterkin, as they expressed pleasure that the island's top women footballers will get the opportunity to lace up their boots again after a three-year break because of COVID-19 pandemic.

"The return of the women's football is very important especially here in Clarendon where we have a lot of talent coming from schools such as Lennon and Garvey Maceo. It is really good that we are able to showcase those talents again," said the overjoyed Smith, who also expressed happiness that they got the emphatic opening-season win.

The heavy scoreline also didn't seem to bother Real MoBay's Peterkin who made it clear that women's football was the clear winner on the day.

"I have a very young team with nine players out of my starting 11 playing competitively at this level for the first time. The experience got the better of us, but with football returning again and my girls able to play more matches, we will get better and better as we take it one game at a time," said Peterkin.

The lengthy lay-off seemed to have prompted Vere to come out firing and Dahlia Whyte lit up the scoring chart on the opening fixture by netting four times in their emphatic win.

Keiba Cowan and Tasheika Hamilton both scored hat-tricks with Cowan finding the back of the net in the fourth, 28th and 50th minutes, while Hamilton got on the scoresheet in the 33rd, 46th and 47th minutes.

Jully-Ann Howard got the other goal for the Clarendon-based Vere.

In other opening-round games, Cavalier were also in a goal-scoring mood at the Captain Horace Burrell Centre of Excellence as they hammered Royal Lakes 9-0. Fraziers Whip edged Olympic Gardens 3-2 at the same venue, while Springers United got the better of Baptist Alliance 2-0 at Paul Bogle High School.