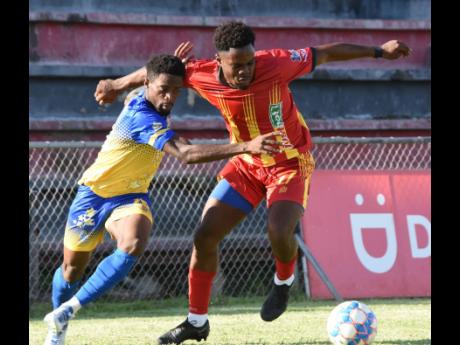 Last year's beaten finalists, Dunbeholden, defeated Tivoli Gardens 2-0 with a goal in each half from Nicoy Christian and Stephen Barnett to end their two-match losing streak at the Anthony Spaulding Complex yesterday.

Coach Jermaine Thomas was pleased to finally get three points on the board again, although he believes they deserved more from the two previous defeats.

"We have been waiting for this (win) a long time and getting it feels good. We dominated the entire first half again and missed numerous scoring chances.

"This has been the sad song for us all season, but at the end of the day we got three points and that is the most important thing," Thomas insisted.

Both teams struggled to settle, but it was Dunbeholden who had the first chances, with Barnett and Christian both kicking straight to goalkeeper Kewong Watkins after breaking through.

They, however, took the lead when Barnett was fouled in the area and Christian converted from the spot five minutes to the break.

Two minutes after the restart Barnett stabbed home at the back post to put Dunbeholden 2-0.

Tivoli were relentless in their efforts, however, and kept pouring forward with Dunbeholden repelling all that the west Kingston-based Tivoli threw at them.

Dunbeholden came back towards the end and had several great chances which they failed to convert.

"In the second half they pushed numbers forward and we could have been a little more tactical in playing for the spaces behind, but they won some second balls in midfield and that was the difference.

"Amidst the high press, we got behind them, created opportunities and did not take them," Thomas added.

Tivoli coach Jermaine 'Teddy' Johnson said they have to be more efficient in the final third.

"We need goals. Once we are in the final third we need to shoot. If you don't shoot you don't score, so we need to get back on the blackboard and try to get that right," Johnson said.

Chapelton vs Portmore at 5 p.m.

Both matches will be at the Anthony Spaulding Complex