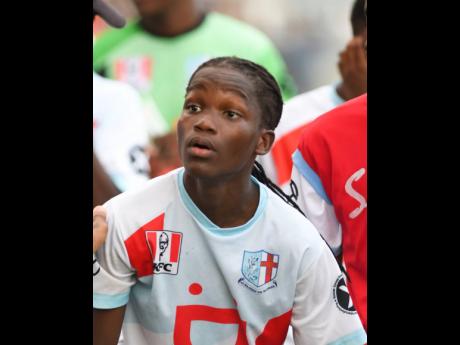 St George's College rebuild has seen progress as the 22-time Manning Cup champions continue to put the difficulties of last season behind them in their current campaign. For midfielder Zabir Taylor, it has been a great introduction in his first year at the Manning Cup level, as his calming presence has been a catalyst for their achievement so far this season.

Taylor has two goals and two assists this year, but his statistics have not been the only highlight of his play.

Assistant coach Marcel Gayle hailed his performance in their 3-0 win over Waterford on Tuesday pointing to his composure with and without the ball, making the smart plays in unlocking an offensive that ensured that they avenged their 3-2 defeat in their first meeting last month.

"St George's over the years, one of our trademarks is being composed. We coach it. We always try to be different from other teams (in that regard)," Gayle said. "Zabir is one of those players. He is special. He makes the football very simple and that is one of his qualities."

Pleased with how he has adjusted to the Manning Cup, Taylor is optimistic about St George's potential after last season's disappointing first-round exit from the competition.

"I feel like I have started off well. (Even) though we are in a rebuilding phase, we have a good quality team and we just need to remain disciplined," Taylor told STAR Sports.

It is those calming qualities that he wants to mirror similar to Spanish and Barcelona midfielder Pedri, a player whom Taylor says he fashions his game after.

"Pedri is a good player and I feel like we have the same attributes," Taylor said.

For his growth and his school's progression this season, Taylor believes that he has scratched the surface of what he can offer.

"I think with a lot of focus and concentration and trying to perfect my craft, I definitely can go far," Taylor said.