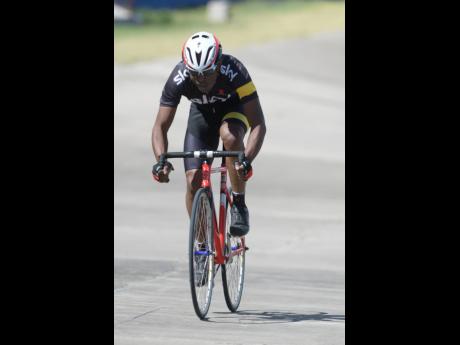 Wayne Palmer participating in a local meet at the National Stadium.

President of Jamaica Cycling Federation (JCF), Wayne Palmer, is warning countrymen that the current local talent pool has the potential to do well overseas and is advising Jamaican sports lovers to look out for them.

Palmer is upbeat about the prospects in cycling, which is not talked about much in Jamaica and he believes they are improving as he seeks to bring more to the fore.

"I think we have a good pool of talent and we are looking to expand that pool because I think it has been contracted since COVID, and we are just starting to develop that talent again, but those that we have, are really good.

"We are very pleased with the performance of the junior athletes, especially in the time trials where it is a timed event so we could compare with previous years. We found that the juniors were doing just as well and maybe even better than recent times, so we do have a very promising set of juniors," Palmer said.

Young cyclist Llori Sharpe has been doing well in Europe, after becoming the first Jamaican to sign an international deal and Palmer argued that should more local cyclists get that platform, they can perform just as well and improve their skills.

"I think we have always had the talent and we do have a set of local cyclists that I believe, if given the opportunity, can develop and perform well overseas, as well. The key with performing well on the international scene is the exposure to consistent racing, training and equipment and also the coaching dynamics that takes place in that sort of atmosphere," he said.

He highlighted 10th-grader at Herbert Morrison Technical High School, Cajur Chue, as one to look out for, as well as others.

"We have a youngster by the name of Cajur Chue, 15 years old, 16 this year, and Cajur is one of our top cyclists, performing as well as the senior cyclists. He won the Junior National Time Trial Championship and his time was even faster than the older athletes. We think that is very good," Palmer said.

He also mentioned Chue's to- five placement at the Jamaica International Cycling Classic, hosted by High Velocity Club in Montego Bay in April.

"Cajur was one of the top riders, he finished in the top-five. All the top riders for Jamaica were there and we had riders from overseas, as well. So, he's one of the talents, one for the future, so I think we can look forward to good things from him," Palmer said.