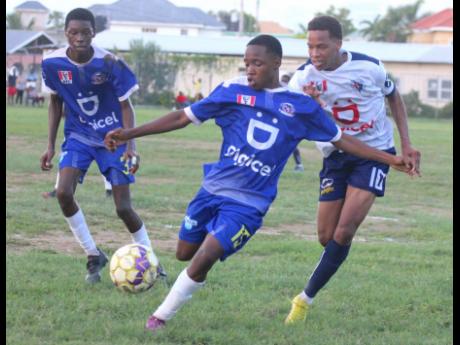 Jamaica College (JC) continue to show their superiority in this year's ISSA/Digicel Manning Cup competition following an impressive 4-0 win over Cedar Grove Academy in their Group B encounter at Cedar Grove in Portmore yesterday.

The 'True Blue' continued their goal-scoring mood, as after hammering St Mary's College 10-0 in their previous encounter, talismanic attacker Maquan Aldridge scored a brace to assist their fourth-straight victory.

Cedar Grove took a primary defensive approach in the first half with JC patiently biding time to break down their resistance.

It took 24 minutes for the opening goal, as Aldridge surprisingly found himself in the box unmarked and rifled a low drive past Jerome Newby in Cedar Grove's goal.

The visitors had to wait until a minute before half-time to get their second goal. Aldridge again pounced on an errant clearance from the Cedar Grove defenders to stab home his second.

With damage limitation clearly on their agenda, Cedar Grove retreated all their players and that tactic proved somewhat effective as JC had to wait until the 75th minute to get their third goal.

Dyllan John would be the beneficiary of a long-range pass which he took in his stride and outpaced his marker to rifle past Newby at his near post.

The contest was sealed five minutes later when substitute Alec Benny robbed a Cedar Grove defender and chipped the ball into the far corner to make it 4-0.

JC's fifth win now sees them on 16 points and at the top of Group B, which is pleasing to coach Davion Ferguson.

"The most important thing in this round is to get the points, which we did today and I am grateful for that," Ferguson said.

Losing coach Nicholas Wilson praised his team for showing a fight against a far superior opponent.

"Our boys gave it their all but we really would have loved it if the score line could have been nil all but such is football," Wilson said.