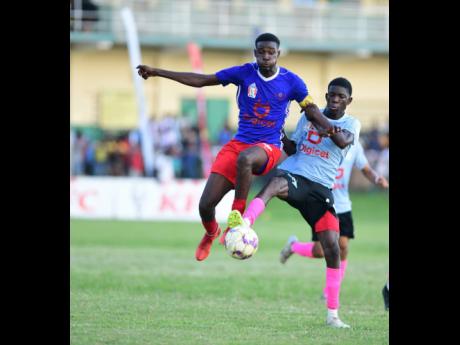 Camperdown High head coach Donovan Lofters could not hide his frustration and anguish at the officiating after their 4-3 defeat to Mona High in their ISSA/Digicel Manning Cup encounter yesterday.

Mona got their goals from Kshaine Gordon in the 21st minute, Zhaine Pinnock in the 31st and 75th and Donhue Mitchell, who got the game-winner in the 88th minute to preserve their winning run in the competition. For Camperdown, Devantae McCrea got a brace in the 23rd and 34th minutes while Shelton Ricketts scored in the 47th.

Lofter's contention was Mona's 75th-minute equaliser when the ball was headed back into play from a free kick and finished by Pinnock. He protested that the ball went out of bounds before being played and was ejected by the referee along with another member of Camperdown's coaching staff.

It was a moment that left him bewildered and infuriated, sparing no expense at the officiating.

"This referee was making pro-Mona calls all day. If we got a kick it in the face is a Mona call. A ball was kicked and it was clearly outside and he gave a goal. I had to react and tell him," Lofters told STAR Sports.

"You are playing the zone leaders, and you are leading 3-2 and you are playing well. It's not like it was a borderline call. It was an obvious call. My team stood still because the ball went out and the referee kept on playing. I don't understand."

What left Lofters frustrated the most, in his mind, was how the momentum shifted away from Camperdown after getting the lead in the second minute of the second half, and how they were getting the upper hand on Mona, who thrashed them 9-2 last month.

"The day that Mona beat us 9-2 we were depleted. (Yesterday) they saw the real Camperdown and the referee had to help them. Our plan was working. We beat Mona through the flanks and it was working to the tee.

"We would have won by more. That call changed the game. We need to look at these referees refereeing these types of matches because they cannot manage," Lofters said.

The result leaves Camperdown in fourth place with eight points, five points behind Hydel who beat Kingston High and are in third place. Lofters, however, says that they are still in the hunt for the second round and have not given up the fight.