Our Angel ready to take the Oaks 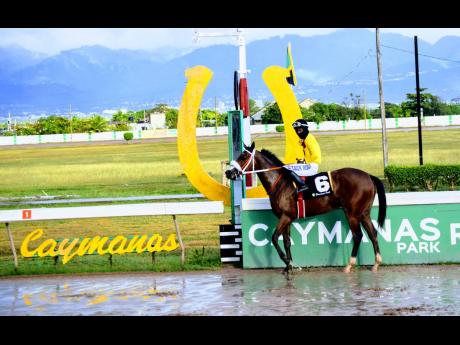 OUR ANGEL (above) will be ridden by Reyan Lewis in the Jamaica Oaks.

IF THERE was ever a horse to have benefitted from the classic season starting two months later, instead of let's-get-it-over-and-done-with April to July, Robert Pearson's OUR ANGEL can take a bow heading into Sunday's Jamaica Oaks at 10 furlongs.

The Savoy Stomp-Myangel filly has come a long way from struggling to beat still-maiden ANOTHER WAVE as a two-year-old last December to her coming of age, chasing home classy ATOMICA in the Portmore Stakes and 1000 Guineas in May and June, respectively.

With ATOMICA hunting a bird in the bush, gunning for revenge against St Leger winner BLUE VINYL in the Jamaica Derby, OUR ANGEL becomes the standout for the fillies-only Oaks after her brave run against colts and geldings at nine furlongs and 25 yards three weeks ago.

Pitted against classic-placed MORIMOTO, who was fourth in the 2000 Guineas and fifth in the St Leger, OUR ANGEL improved into third three furlongs out, joining four-year-old TRUE AL SKY a furlong and a half out. MORIMOTO skittered away for a length and three-quarter win but TRUE AL SKY had to keep second by a half-length from OUR ANGEL.

Whereas MORIMOTO lines up in Saturday's derby, hoping for another pay cheque behind BLUE VINYL and ATOMICA, TRUE AL SKY franked the form by returning last week to beat sprinters at five furlongs straight, closing rapidly on the stands' side with Dick Cardenas.

OUR ANGEL's improvement has seen her getting the better of Jamaica Two-Year-Old Stakes winner, GOLDEN WATTLE and SILENT MISSION, who were second and third, respectively, behind ATOMICA in April's Thornbird Stakes at seven furlongs.

Whereas GOLDEN WATTLE appears to have gone completely off the rails, finishing a distant sixth in the 1000 Guineas, SILENT MISSION finished on OUR ANGEL's tail in the Portmore and 1000 Guineas. However, OUR ANGEL comprehensively beat SILENT MISSION at seven furlongs on July 2, prompting leading trainer Jason DaCosta to dig into his tack room, discarding the visor, which has been replaced with blinkers and a figure eight, plus bustling Philip Parchment taking over from Anthony Thomas.

DaCosta has four runners in the Oaks with Thomas aboard SUNSET SILHOUETTE, the half-sister of famed She's A Maneater. SUNSET SILHOUETTE clocked 1:57.3 at nine furlongs and 25 yards in June. However, that was on a windy afternoon, plus she had 114lb, running on a track getting faster each day before being resanded, a week before OUR ANGEL's big run behind MORIMOTO and TRUE AL SKY.

Lewis can hold his own and need not fear what is bound to be a DaCosta relay. OUR ANGEL has enough pace to track and beat 'em all.