Positive vibes for Antonio ahead of Mexico 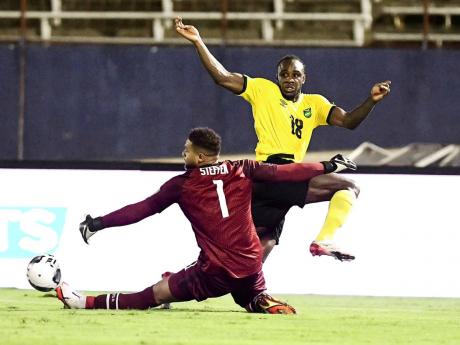 Reggae Boy Michail Antonio (right) makes a run at goal against United States goalkeeper Zack Steffen during a World Cup qualifier at the National Stadium in Kingston on Tuesday, November 16, 2021.

Having scored two goals in the last two matches for the Reggae Boyz, striker Michail Antonio says he aims to add to his tally when the Jamaicans take on Mexico in today's FIFA World Cup qualifier at the National Stadium at 7 p.m.

Antonio, who plays for London-based West Ham United in the English Premier League in England, said this evening's encounter is a crucial one for Jamaica.

"I am feeling positive because all these games now are must win games, so all we are going to do out there is just be positive and try and win the game," Antonio said.

Mexico is a quality team, but one thing we have is quality players here and as long as we go out there and be positive, anything can happen, but we want to make sure that we get the win."

Antonio, 31, has scored nine goals in all competitions for West Ham this season, and he and Shamar Nicholson, with two goals apiece are Jamaica's top scorers in the qualifying campaign.

Antonio says he is in what he describes as excellent physical shape.

"Definitely, as a striker, obviously I am here to score goals, I got two goals in the last two games, so I am just positive and, hopefully, I keep going and keep scoring," he said. "A lot is expected of me, but I like the pressure and I have always dealt with pressure, and I wouldn't be a professional footballer if I couldn't deal with it. So I am going to go out there and do my best."