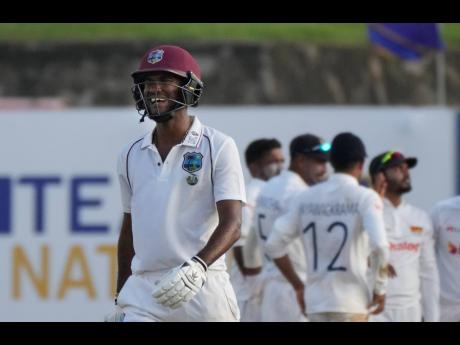 West Indies’ captain Kraigg Brathwaite leaves the field after being dismissed during the day two of the first Test between Sri Lanka and West Indies’ in Galle, Sri Lanka yesterday. Brathwaite was dismissed by off-spinner Ramesh Mendis.

WEST INDIES (WI) men's captain Kraigg Brathwaite says his side's batsmen need to review how they take on the Sri Lankan spinners, following an underwhelming performance with the bat on yesterday's second day of the first Test in Galle.

The visitors lost six wickets to the Sri Lankans spinners for 54 runs, to close day two on 113 for six, 273 runs behind the home side, who were eventually dismissed for 386.

The Windies batsmen failed to cope with the spin-friendly Galle pitch, which bounced and turned the entire day.

Off-spinner Ramesh Mendis, who picked up the wicket of Brathwaite, went on to claim the scalp of Shai Hope and Roston Chase to end the day with three wickets for 23 runs, while rookie left-arm spinner, Praveen Jayawickrama, bagged two wickets for 25 runs.

Brathwaite made it clear that the team's plans towards the spinners will need some tweaking as the Test match progresses.

"Their spinners bowled some good balls, but we will sit and review how we could better play the off-spinner who got three scalps," he said.

With opener Jeremy Solozano out injured because of a blow to the head while fielding, it was vice-captain Jermaine Blackwood who opened the innings with Brathwaite.

The pair looked intent on getting runs on the board following a 46-run opening stand. However, Blackwood was the first wicket to fall, lbw for 20.

Five runs later, Nkrumah Bonner became the first of two wickets for Lasith Embuldeniya, and from then, the Sri Lankans tightened the screws, despite a fighting 41 from skipper Brathwaite, who was disappointed that he didn't carry on for his team.

"I felt good, but I am disappointed because I got a start and I didn't go on. Next time, I have to make up for that," added Brathwaite.

For Brathwaite, the effort from his troops with the ball on the second day must be commended.

"I am very impressed with all the guys' effort. We came back on the second day and we fought by keeping it tight and I think that was the key to bowling them out, which was good," he said.