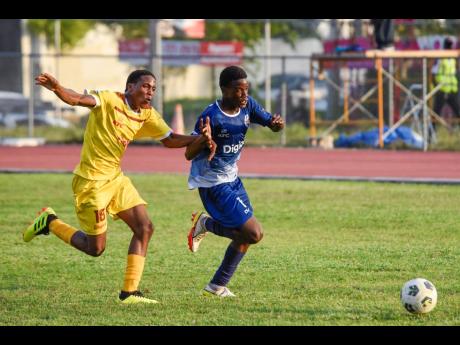 WITH BACK-to-back wins that included the scalps of defending ISSA/Manning Cup champions, Jamaica College (JC), Kingston Technical High School (KTHS) head coach, Shaun Charlton, says his team is ready to earn their respect against the top teams in the country.

KTHS will face many-time champions St George's College today at Stadium East playing field at noon, looking to maintain their slim lead atop Group A, which is turning into a tight race for the two qualifying spots for the second round.

KTHS bounced back from their season-opening loss to Charlie Smith High and are on a two-game winning streak, highlighted by their upset first-round victory over reigning champions JC at their home ground, a repeat of what happened in 2018 when the two teams met in group play.

Charlton says that the JC result has boosted their belief and removed any intimidation factor in playing any of the top schools.

"The most enjoyable part of it is that the youngsters' confidence has been lifted since defeating the champions of 2019. Knowing that there was a history before when Kingston Technical defeated JC on their home turf in 2018, these young men set within themselves (a target), to make a name for themselves by doing what the team before them did," Charlton told STAR Sports.

"It has propelled their confidence that they can go out and face any Goliath that is in front of them, being the youngest in the group."

It is a mindset that Charlton says bodes well for their match against St George's College, who are also on a two-game winning streak.

While acknowledging the strength that the 'Light Blues' from North Street possess, Charlton says that they intend to trust in their own path for them to gain the respect that they deserve as a team that can contend in a competitive field.

Meanwhile, St George's assistant coach, Marcel Gayle, while pleased at the progress of his squad so far following their 1-0 win over Bridgeport on Saturday, said it was vital that there is no drop in form because of how competitive the group has become.

"This is a very tight group. We have to go out there every match and try to do our best, and hopefully we can get a positive result," Gayle said. "This is one of the seasons where anything can happen, but I think we have been playing better each game we have played."