WI newcomer taken to hospital after hit on helmet 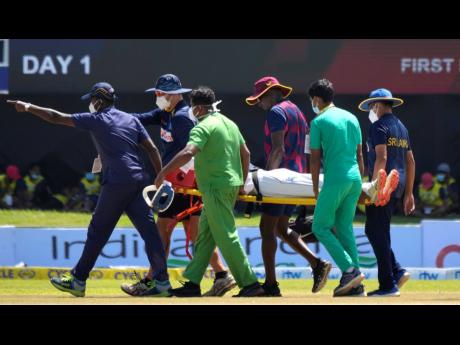 Support staff members carry West Indies’ player Jeremy Solozano, on stretcher, to an ambulance after he was hit by a shot played by Sri Lanka’s Dimuth Karunaratne during day one of the first Test cricket match between Sri Lanka and West Indies’ in Galle, Sri Lanka, yesterday.

West Indies newcomer Jeremy Solozano will spend Sunday night in hospital for observation after he was struck on the helmet while fielding close to the bat during the opening day of the first Test against Sri Lanka yesterday.

The incident occurred a little before lunch at the Galle International Stadium, and Solozano, 26, was taken off the field on a stretcher before he was immediately whisked away in an ambulance to a hospital more than an hour away in the Sri Lanka capital, Colombo, for medical scans.

"He will be kept at the hospital overnight for observation. We will continue to keep you posted on any further updates from our medical team."

Solozano was struck on the front of the helmet near the forehead after Sri Lanka captain Dimuth Karunaratne pulled a short delivery from part-time off-spinner Roston Chase in the 24th over.

Solozano removed the helmet and spent several minutes lying on the ground, but he appeared conscious as he got medical treatment on the field, while surrounded by worried players from both sides.

It was a bitter-sweet day for Solozano after he was handed his debut cap before the start by head coach Phil Simmons.

Solozano, the left-handed Trinidad and Tobago Red Force opening batsman, became the 327th player to play in Tests for the Windies.

Karunaratne was undefeated on 132 at the close and Sri Lanka reached 267 for three in the first innings, after they decided to bat.