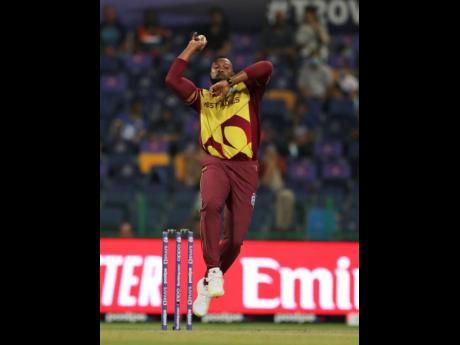 West Indies captain Kieron Pollard says he will continue to lead the regional side in the short format of the game, despite heavy criticism for the team's exit from the ICC Men's T20 World Cup.

The West Indies suffered their third loss of the tournament on Thursday, with a 20-run loss to Sri Lanka, which ended their chance of advancing to the final four, despite having one game remaining.

Despite a fighting unbeaten 81 from Shimron Hetmyer, the West Indies could only manage 168 for eight on a better batting surface, after being asked to chase 190 to win.

Pundits continued to question the form of the veteran players such as Chris Gayle and even Pollard himself, who managed just 46 runs in four innings.

Despite the underwhelming performance from the team, Pollard says he believes he still has a lot to offer to West Indies cricket.

"We came to the World Cup to win and we haven't done that," he said at the post-match press conference. "Unless you are part of decisions that are going to get rid of me, or fire me, or retire me, as I stand right now, I have no intentions of not playing international cricket. One tournament or a couple of bad games don't make a summer. And for me, personally, there's a lot of mileage in my legs as an individual."

The batting has underwhelmed at the tournament and Pollard said that was the main cause for the team's exit.

"The batting has struggled throughout the entire tournament, and it has been disappointing," he said. "Obviously, we've been singing the same song over and over and it's something that hasn't helped us, the way that we've batted throughout the tournament. We just have to accept that we weren't good enough."

With a full post mortem of the team's performance expected at the end of the tournament, Pollard mentioned what he believes could help the region's short format cricket in the future.

"We need to have another tournament other than CPL (Caribbean Premier League) where we can unearth new talent," he said. "When we had the Caribbean T20, that was an opportunity to bring young talent from different parts of the Caribbean to be able to have the nucleus for this last generation or so. Since CPL has come in, yes, it's a franchise-based system, but we've only had the opportunity to recycle the same players over and over again."

C Karunaratne not out 3

Did not bat: A Fernando, B Rajapaksa, W Hasaranga, D Chameera, M Theekshana, B Fernando

E Lewis b B Fernando 8

S Hetmyer not out 81

A Russell c & b Karunaratne 2

A Hosein not out 1

Did not bat: R Rampaul