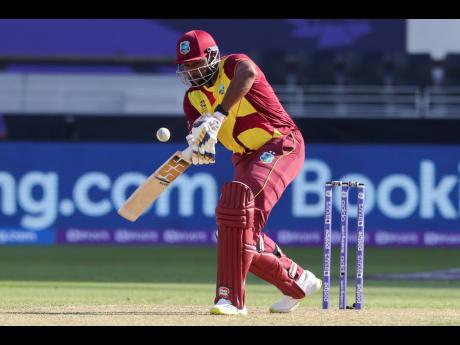 The West Indies will be hoping that the hype surrounding their capable yet ageing stars,will come to fruition when they face Sri Lanka in a must-win contest at the ICC Men's T20 World Cup today, starting at 9 a.m. Jamaica time.

The regional side's slim chances of making it into the final four will rely on them getting by Sri Lanka and Australia in their final games, then hope results from other matches go their way.

Having said that, the defending champions have looked anything but the 2016 winners in this year's tournament, with the team batting unit failing to spark.

The West Indies have the second lowest batting average in the tournament, and a scoring rate of less than a run a ball has contributed to the team sitting in fifth position in the six-team group, with two losses and a win.

Captain Kieron Pollard is hoping that the team's recent winning record of 4-1 against Sri Lanka, since the last global showpiece, will continue as they seek to keep their slim hopes alive.

"The guys are confident and we know exactly what is needed in terms of from a run rate perspective. It's an opportunity for the guys to take off the shackles that were holding us back in terms of the batting performances, but it's important we also think about winning the cricket game," said Pollard.

The West Indies are expected to field the same team that defeated Bangladesh in their previous game.

However, their batting unit, which should include Evin Lewis, Chris Gayle, Roston Chase, Nicholas Pooran and Shimron Hetmyer, may need to prepare well to face a barrage of spin, led by Wanindu Hasaranga, who has picked up 14 wickets in the tournament thus far.

With the Abu Dhabi pitch having something in it for everyone, Pollard is urging his batters to assess the situation quickly and adjust accordingly.

"It has been good cricketing wickets, but it has been challenging and it is not only us as a team that has struggled. Different world-class players around the world have struggled as well. But they've just found the rhythm to compound everything together and get a respectable total."