WI tempted to play Russell in the final warm-up match 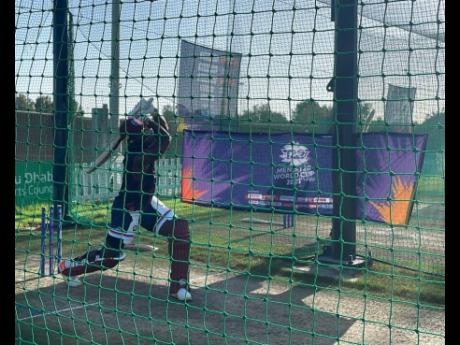 The West Indies will have their final run-out before competition commences as they play Afghanistan today in Dubai in a warm-up game at the ICC Men's T20 World Cup.

After losing their opening warm-up match against Pakistan on Monday by seven wickets, the Kieron Pollard-led side will be bolstered by the news that big-hitting Jamaican all-rounder Andre Russell is available to play after recovering from a hamstring injury he picked up in the Indian Premier League.

Cricket West Indies posted a video on their Instagram on Tuesday showing Russell hitting balls in the nets, and when asked about how he was feeling, the man dubbed 'Super Man' gave all assurance that he was good to go.

That assurance from Russell may prompt head coach Phil Simmons to give the right-hander a run-out against Afghanistan, seeing that the West Indies' next assignment would be their World Cup opener against England on Saturday.

However, former West Indies fast bowler Franklyn Rose is against the idea of playing Russell in the practice game, as he believes the all-rounder should be saved for the real deal given the unpredictability of the West Indies batting at present.

"I wouldn't risk Russell in the practice game, I would want him to play against England because his presence alone will be a big boost for the West Indies. I hope he is honest about his fitness with the West Indies coaching staff because as a former player myself I would sometimes hide my injuries to play in the big games," said Rose.

Rose said a half-fit Russell would still be a better option for the misfiring West Indies batters at present, and he would not hesitate to play the hard-hitting right-hander as a batsman alone if needs be.

"There is no one in the team at present that can bat better than Russell at the T20 level, we know what he is capable of with the bat, he is known around the world in all the T20 leagues for his big-hitting and he has proven to be a match-winner with the bat many times," added Rose.