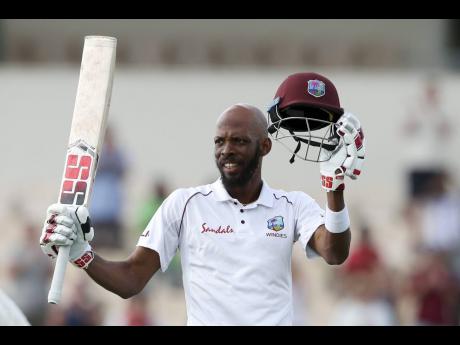 Barbadian all-rounder Roston Chase says he is willing to pick up the mantle and play the sheet anchor role for the West Indies at the ICC T20 World Cup which is set to get under way on October 17.

That role that Chase spoke of is similar to the one Jamaican Marlon Samuels played for the regional side when they won the 2012 and 2016 T20 World Cups.

The stylish right-hander Samuels had Man-of-the-Match performances in both finals, scoring 78 off 56 balls against Sri Lanka in 2012 and an unbeaten 85 off 66 against England in 2016.

Chase, who is expected to make his debut at the global showpiece, is keen on replicating the rich form he displayed during the recent Caribbean Premier League where he ended the tournament as the Most Valuable Player with 446 runs and 10 wickets for the St Lucia Zouks.

"I see myself playing a similar role (as Samuels did). It's the role I played for the St Lucia franchise for the last two years; come in most likely just after the Powerplay, knock it around, pick up the ones and twos and get the occasional boundary when the ball is in my area," said Chase.

In the past, the West Indies have been criticised for having too many power hitters and not enough batsmen who can rotate the strike and keep the scoreboard ticking over.

This World Cup could be the perfect arena for the Barbadian, who averaged 49.55 in 12 matches at the CPL at a more than decent strike rate of 144.33.

Despite featuring mainly for the West Indies in the longer formats, Chase made it clear that his game has evolved to suit the shorter game, and it was no fluke that he scored the most fours in the recent CPL with 35.

"It's an easier role for me; I like that role. With the power-hitting guys that we have in this team, my role should be just to give them the strike and let them do their thing."

Chase and the rest of the West Indies team will continue to fine-tune their preparations with daily net sessions until they get their first taste of action in Dubai with a warm-up game against Pakistan on October 18.

The regional side will officially bow into action at the World Cup against 2016 runners up England in Dubai.