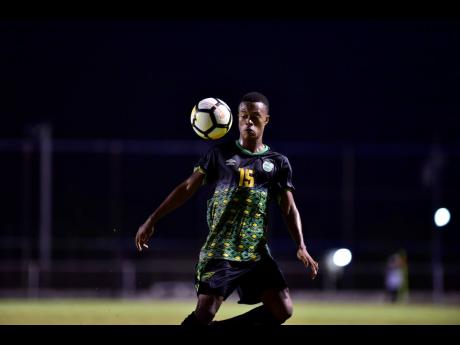 Jamaican duo Neco Brett and Deshane Beckford were on target for their clubs in midweek matches of the United Soccer League (USL) Championship on Wednesday.

Brett scored a well-worked second-half goal to help Birmingham Legion FC clinch a home playoff game with a 3-1 win over Austin Bold at BBVA Field, but Beckford's fifth goal of the season was not enough as El Paso Locomotive beat his Colorado Springs Switchbacks 4-2 at Southwest University Park.

Brett's strike was sandwiched between a first half headed goal from centre back Alex Crognale and a breakaway cherry-on-top from midfielder Bruno Lapa that got Legion what they wanted.

Brett, Birmingham's leading scorer, hit the back of the net in the 75th minute when Jaden Servania found him at the top of the box before he played a quick one-two with JJ Williams to sneak behind the Bold backline and finish.

It was his 17th goal of the season and pulled him into a tie for third-most in the USL Championship with Cameron Lancaster of Louisville City FC and Kyle Murphy of Memphis 901 FC.

In El Paso, Texas Beckford scored for the Switchbacks, after the match was tied 1-1 and he forced a turnover high up the field, received a pass from Andre Lewis and turned a defender on top of the penalty area before hitting a low shot into the right corner of the goal.

Hadji Barry had given the Switchbacks the lead in only the fifth minute of the game when he tied the USL Championship record for the most goals in a single season with his 25th goal and Locomotive equalised midway through the first half when Ricardo Zacarias squeezed in a shot at the near post from a set piece.

But Macauley King equalised again for Locomotive from a set piece in the 61st minute before substitute Luis Solignac redirected a cross to give them the lead four minutes from full time and Diego Lunch added a fourth item in the seventh minute of stoppage time.