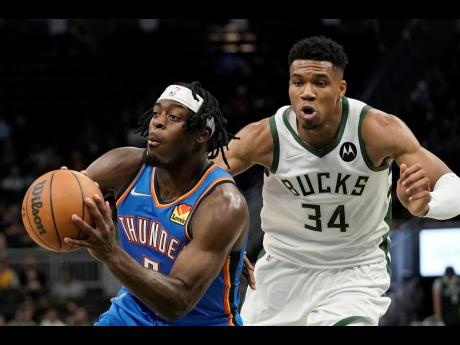 Oklahoma City Thunder’s Luguentz Dort looks to pass in front of Milwaukee Bucks’ Giannis Antetokounmpo during the first half of an NBA preseason basketball game on Sunday in Milwaukee.

Giannis Antetokounmpo scored eight points in 17 minutes in his preseason debut for the defending NBA champions Milwaukee Bucks, who had eight players score in double digits in a 130-110 victory against the Oklahoma Thunder on Sunday night.

The Bucks are being careful with Antetokounmpo, who hyperextended his left knee in the Eastern Conference finals but returned for the NBA Finals. He was named Finals MVP after leading the Bucks to the title in six games against the Phoenix Suns.

"It feels good. I'm not going to lie. It feels good to be a part of the team, just go out there, run up and down, make some plays, just being around the team, being here at Fiserv," said Antetokounmpo, who mentioned several times that the felt "rusty."

Asked where he felt rusty, he said: "Everywhere. My legs, back, hands. But it's OK. I'm getting back to it."

Khris Middleton (14 points) and Jrue Holiday (11 points) also made their preseason debuts for the Bucks.

Luguentz Dort scored 19 for the Thunder.