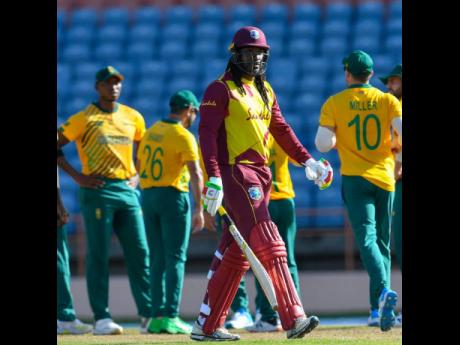 Gayle has played just two games for the Punjab Kings following the restart of the IPL. The big-hitting left-hander has made it clear that the constant bubble life and playing in over 30 T20 matches this year has caught up with him and he says he will be taking a break to recoup and refresh himself ahead of the big showpiece next month.

"Over the last few months, I have been a part of the Cricket West Indies (CWI) bubble, Caribbean Premier League (CPL) bubble followed by the IPL bubble, and I wish to mentally recharge and refresh myself," said Gayle in a statement issued by Punjab Kings.

"I want to refocus on helping the West Indies in the T20 World Cup and would like to take a break in Dubai. My thanks to the Punjab Kings for giving me the time off. My wishes and hopes are with the squad always. All the very best for the games coming up."

Gayle's Punjab Kings are currently in sixth place with eight points on the IPL table and head coach Anil Kumble, while disappointed that the hard-hitting left-hander has decided to leave, understands his position.

"I've played against Chris and have coached him at Punjab Kings and all through the years I've known him he has always been an absolute professional and we as a team respect his decision and desire to prepare himself for the T20 World Cup," said Kumble.

The Punjab Kings further stated that Gayle is expected to remain in the UAE and then join the West Indies team at the World Cup ahead of the team's opening warm-up game against Pakistan on October 18.

Gayle joins a list of international cricketers who have withdrawn from bubble style cricket series, with notable England all-rounder Ben Stokes, Andre Russell, Kieron Pollard and David Warner all pulling out of respective series and pointing to bubble fatigue.