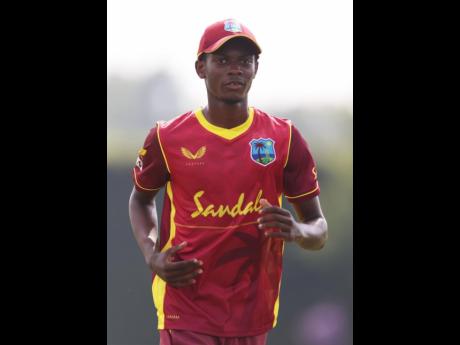 Jamaica and West Indies Under-19 fast bowler Andel Gordon say he is eager for more international action, following the recent six-match, one-day international (ODI) tour of England by the regional side.

The 18-year-old pacer was one of two Jamaicans in the West Indies Rising Stars team, and the left-hander left the United Kingdom relishing another opportunity, having claimed seven wickets in the four matches he played.

The leading scorer for the West Indies on tour was middle-order batsman Teddy Bishop who made 271 runs, including the only century of 133 in the third match. Opener Matthew Nandu was second with 162 runs, while Isai Thorne, a 16-year-old fast bowler, ended the tour as the West Indies' leading bowler, picking up eight wickets in four matches.

The Youth ODI Series ended 4-2 in favour of the home team, with two of the matches ending by the narrowest of margins, with victory by one wicket.

The left-arm pacer Gordon had the best bowling figures of three for 37 in the fourth ODI, and the St Mary native is keen to learn more at the international level.

"The tour to England was a great learning experience. The team was a bit nervous in the first couple of games but once we got over that, we performed better towards the end of the series," said Gordon.

Gordon, who is currently studying at the G.C. Foster College, says he is eager for the team to play in the upcoming ICC Under-19 World Cup, which will be held in the Caribbean from January 4 to February 3, 2022.

"We have a good team and once we put out our best and get over our nervousness, we will do well."

The former Jamaica Under-15 and Under-17 player expects England, as well as Sri Lanka and India, to push for the Youth World Cup. However, the former St Mary Technical student believes playing at home will give his side a huge advantage come next year.

"Playing in the England series, everybody saw what we can do as a team. What we have to do is to keep putting in the work and build our confidence and we will get positive results."

Gordon, who is a great admirer of Australian pace great Mitchell Starc, says he is already putting in the work to perfect his craft leading up to the big show-piece early next year.

"I want to be more consistent with my bowling, especially my inswinging delivery to the right-hander and the outswinger to the left-hander."