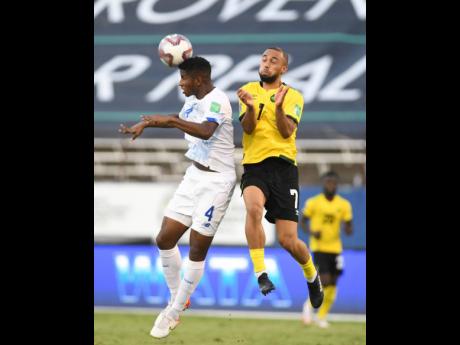 Kemar Roofe (right) in action for Jamaica against Panama’s Fidel Escobar Mendieta during their Concacaf World Cup qualification match at the National Stadium on Sunday, September 5.

Half-time substitute Ianis Hagi made an instant impression, setting up striker Roofe's close-range opener on 48 minutes - his fifth goal of the season.

Roofe, 28, was then twice denied by overworked Polish goalkeeper Max Stryjek, who ended Livingstone's hopes by blotting his copybook with a pass straight to Alfredo Morelos, the Colombian netting on 63 minutes.

While Rangers' 10-year silverware drought ended with the League title last season, they have not lifted either domestic cup since 2011.

Rangers' assistant manager Gary McAllister said: "First half, we huffed and puffed and did create a few chances, but were a wee bit wasteful in the final third.

"We lacked a bit of quality and I thought Ianis brought it. Credit to him, he has had a tough time recently with COVID, 10 days' quarantine, he was only back two or three days ago. He looked sharp and brought that we bit of quality we needed."