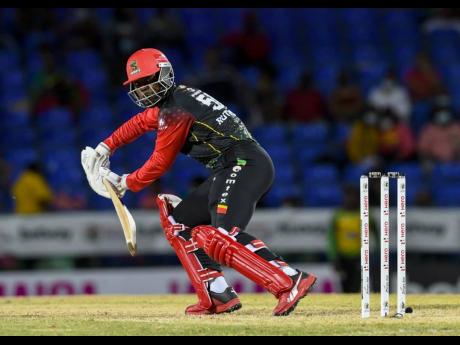 THE JAMAICA Tallawahs failed in their bid to secure back-to-back wins last night, after they went down by six wickets to the St Kitts and Nevis Patriots in match 12 of the Hero Caribbean Premier League.

Man-of-the-Match Sherfane Rutherford hit an unbeaten, even half century off 26 balls to help the Patriots chase down the 167 needed to remain unbeaten from their four games. The home side eventually got to 169 for four in 17. 4 overs, with Jamaican Fabian Allen weighing in with a swashbuckling 30 from 12 balls, with two fours and three towering sixes.

Rutherford, who was scoring his third half century in four innings this season, says he was obligated to carry on his role of scoring runs for the team.

"Coming into this tournament I told myself I have a responsibility and batting up the order was something that I always wanted," said Rutherford.

In the meantime, opener Evin Lewis also made his presence felt, following a brisk 39 from 27 balls, with two fours and four sixes.

Earlier, captain Dwayne Bravo bagged three wickets for 25 runs to help restrict the Tallawahs to 166 for eight off their 20 overs, with Carlos Brathwaite top-scoring with 27 and wicketkeeper/batsman Chadwick Walton retiring hurt on 26, which meant Kennar Lewis had to keep wicket.

Captain Rovman Powell weighed in with 24, against two wickets for Paul Van Meekaren and Dominic Drakes.

The win pushed the Patriots to eight points and still atop the CPL standings, while the Tallawahs remain second on four points, with two wins and two losses.

That second win for the Tallawahs came on Tuesday night, after Kennar Lewis played a Man-of-the-Match innings to lift the Jamaican franchise to a six-wicket win over the Barbados Royals.

Lewis hit a brilliant 89 off 53 balls to propel the Tallawahs to 155 for four, this after the Jamaican side had restricted the Royals to 151 for eight. Pacer Migael Pretorious led the Tallawahs bowling with four wickets for 45 runs, while Fidel Edwards bagged two wickets.