German Cup quarter-final called off due to virus infections 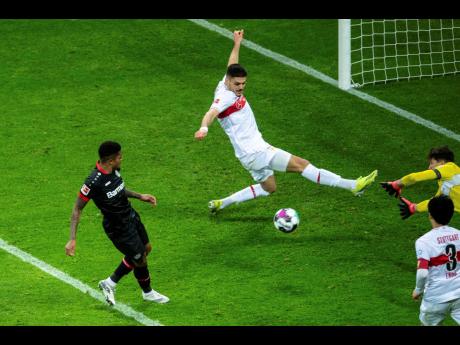 Leverkusen’s Leon Bailey (left) scores against Stuttgart’s Konstantinos Mavropanos and goalkeeper Gregor Kobel to make it 3-1 during their German Bundesliga match at BayArena in Leverkusen, Germany, on Saturday February 6.

Werder Bremen's German Cup quarter-final against Jahn Regensburg was called off yesterday due to coronavirus infections among the second-division team.

The German football federation said it took the measure due to quarantine orders for Regensburg, and it was working to reschedule today's game.

Regensburg said the local health authority instructed the entire team and staff to go into isolation after "several" players tested positive for COVID-19 on Sunday, two days after Mersad Selimbegovic was diagnosed with the more infectious British variant on Friday.

Regensburg's league game against Paderborn went ahead after the first diagnosis on Friday as the other members of the team tested negative at the time, and the Regensburg health authorities' investigation did not suggest any other close contacts around the team.

Regensburg did not say for how long its staff would need to isolate, but Bremen said the quarantine will last 14 days, also ruling the second-division club out of scheduled league games against Osnabruck on Sunday and Greuther Furth on March 13.