Shaw returns with a brace in French league 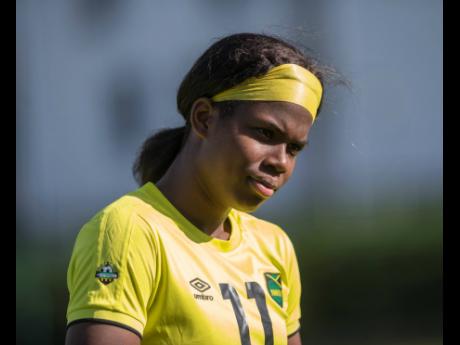 Despite the monthlong break from the 2020/21 French Division One campaign, national striker Khadija Shaw did not show any signs of rust on her return on Saturday, netting a brace and providing two assists as her club Bordeaux stormed to a 6-0 win over Le Harve at the Stade Sainte Germaine.

The 24-year-old Shaw scored in the 62nd and 72nd minutes while Maelle Garbino took home the match ball, contributing with a first-half hat-trick in the 6th, 7th and 25th minutes, respectively, as Bordeaux tightened their grip on third place and the final Women's Champions League qualification spot.

Bordeaux's absence from league play for four weeks was attributed to a postponement of their early February fixture with Dijon because of COVID-19 cases from within the Dijon camp. COVID-19 issues also resulted in the postponement of the game between Stade de Reims and Paris FC. Additionally, domestic football took a two-week break because of the international window.

Shaw was presented with her second player-of-the-month before the game, being recognised for her goal-scoring output that month, netting five goals in three games in January. She was previously named player of the month for October, scoring seven goals in that month. In between scoring her 18th and 19th league goals of the season on Saturday, she also set up Garbino's opener as well as Bordeaux's sixth goal, which was scored by Claire Lavogez in the 80th minute with the match already decided. She has also registered a total of five assists for the season.

Shaw maintains her lead atop the golden boot standings ahead of Paris Saint Germain's Marie Antoinette Katoto, who scored her 17th goal of the season on Saturday in a 4-0 win over Issy FF. PSG's win also maintains their one-point lead atop the table ahead of defending champions Lyon with 15 games played. Bordeaux having played a game less are on 29 points, eight points clear of nearest challengers for the Champions League sport Montpellier who have 21. Bordeaux's rescheduled fixture with Dijon will take place this Saturday.