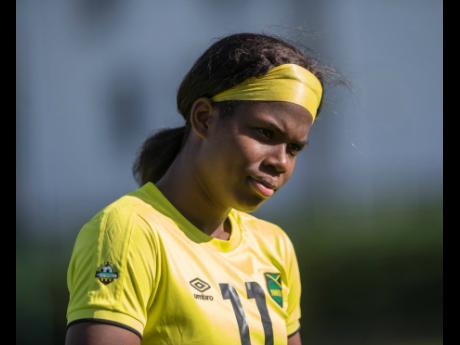 The Reggae Girlz went on another scoring spree at the National Stadium last night to end the Concacaf Group B Women's Olympic qualifiers with a massive 37 goals in four matches. Last night, they whipped US Virgin Islands (USVI) 7-0 in their final match. In earlier matches, they defeated Cuba 12-1, Barbados 7-0 and St Lucia 11-0. Khadija 'Bunny' Shaw led the way with five goals (sixth, 14th, 20th, 28th and 74th), and in the process became the nation's leading international goalscorer with 40 goals. Cheyna Matthews (eighth) and Trudi Carter (30th) also scored one each for the Jamaicans who topped the group with maximum 12 points from four games. Despite letting in six goals in the first half, USVI were resolute in the second-half and kept the hosts off the scoresheet until the 74th minute when Shaw netted from a free kick after she was fouled outside the area. Jamaica created many other opportunities to add to the score but could not take advantage.

Jamaica's assistant coach, Lorne Donaldson, said although this round of qualifying was fairly easy, they expect things will be a lot tougher in the next phase. He hopes they will have their best players as well as some competitive friendlies going into the tournament.

"The next FIFA date will be very important, hopefully, we can get all the girls in and we can get a decent (practice) match against one of the top European teams, that would be one of my wishes but that's the JFF's thing, they will have to look into it and get us a match," he said.

Although the matches were easy, Donaldson said they got to spend valuable time playing together and he says that also helps them to gel more as a unit. "It's important when you play games, even though they were not that challenging, we try to get something out of it and see what we can do. There were also some new players that we were looking at, some are young, so it gave us a chance to look at other players and we saw some good things, so games like this can still help us," he continued.