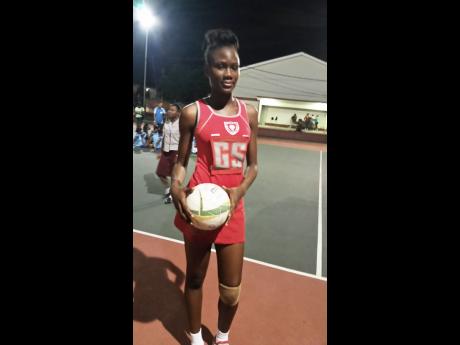 file Simone Gordon ... scored all the goals in tied match.

Defending champions, the Queen's School senior netball team had a winning start to their campaign in on Thursday in the Inter-Secondary Schools Sports Association Urban netball competition at the Leila Robinson, defeating St Andrew Technical 33-16 in group two action.

It was a very slow start for the defending champions who found goals hard to come by. After leading the first quarter led 6-2 and 12-7 at half time.

In the final two quarters they found form as the lanky goal shooter, Simone Gordon, who was a bit off in the early stages demonstrated her true shooting talent, scoring freely as the team rushed into a 22-12 lead at the third quarter before an easy 33-16 win in the end.

Winning coach Marvette Anderson was pleased with the win.

"The most important thing was to get the win despite a slow start but we got the victory and I was not concerned about the slow start as these set of girls are very experienced and knows what it takes to win," she said.

The Queen's juniors had to dig hard to stave off a late rally from the Wayne Stewart-coached Camperdown in a very close encounter 24-24.

Anderson was not happy with the tied scores.

"Not the result we were looking for but we will just have to go back and fix what needs fixing .This is not a setback for us as we just have to win our other matches and advance to the Semi finals and then we will take it from there," she said.

There were double wins for St Hugh's and Holy Childhood. Last year's beaten senior finalist, St Hugh's registered an impressive 54-23 win over Campion. The junior team also got by Ardenne 30-17.

Holy Childhood juniors ran out an easy 29-18 winner over Tarrant before their seniors easily overpowered Meadowbrook 44-26.

Below are results of other matches: