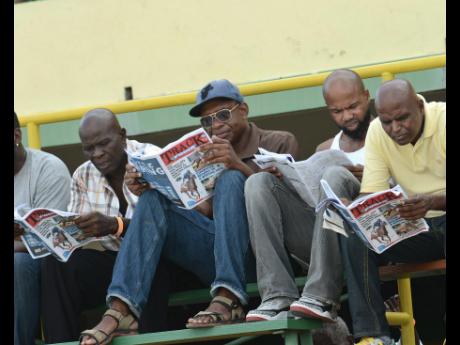 UNDONE by post-position one out of the straight on October 7, ROYAL ASSAULT returns on the round course tomorrow lighter than he has ever been in his last 10 starts.

Benefiting from in-form apprentice Linton Steadman's three-kilo claim, the chestnut colt is down to carry 51.0 kilos among a dozen three-year-olds in the 1200-metre Ron Ron Trophy.

ROYAL ASSAULT's form, even in defeat, can't read any better. Last time out he lost to United States-bred LONG RUNNING TRAIN in 57.4, going down by a length and a half after having to drift towards the stands' side from post-position one.

On the contrary, LONG RUNNING TRAIN was perfectly drawn, widest in the 11-horse field, and was a kilo lighter than local-bred ROYAL ASSAULT. The American returned two and a half weeks later to prove he was vastly improved by romping the 1820-metre Royal Dad Trophy.

Prior to losing to LONG RUNNING TRAIN, ROYAL ASSAULT had won at 1100 metres, clocking 1:06.2. Before that victory, he was twice beaten by none other than BUZZ NIGHTMARE, a torrid sprinter who has only lost once in six starts, his last victory being in 59.2 for 1000 metres round in Wednesday's first race.

Reverting to the round course tomorrow, carrying only 51.0 kilos, ROYAL ASSAULT should dominate the splits into the lane. ROAD WI SEH, the fancy of top STAR Post To Post Pick-6 tipsters, Indian Flame and The Clockman, was well behind BUZZ NIGHT MARE and ROYAL ASSAULT in the O&S Tack Room Trophy after coming to the class with much acclaim on August 22.

Wayne DaCosta's SILVER CLOUD, a nap selection for Kirk Kong, Johnny Handsome and Gizzy, won at 1500 metres on August 19. The grey colt is not known for speed and is bound to be outsped by ROYAL ASSAULT, who is also five pounds lighter at the scale.

November's monthly incentive race of the STAR Post To Post Pick-6 tipsters competition saw The Clockman off to a blazing start with eight winners on Wednesday's 10-race card.

Tracked by Jimmie and Indian Flame on six apiece, The Clockman has fired off two stand-alone selections this Saturday after being the lone tipster with nap selection BLUE EYE BOY on Wednesday.

In Saturday's fourth race, The Clockman has chosen BATIDOR DE MUNDO, opting for stamina and the gelding's September 2014 win over TITANIC at 1820 metres.

The Clockman's other stand-alone for Saturday is SHIP LODE, a nap selection in the sixth event, suggesting he is looking to increase his lead in the $10,000 monthly incentive race.

Saturday's fourth race, in particular, should be interesting as four of eight tipsters, including The Clockman, have stand-alone selections in the event.

Track and Pools' Kirk Kong has gone for UNBREAKABLE, longshot specialist The Editor has MARIA'S GLORY whereas Clarkie has gone for COLD GROUND, banking on the distance horse turning his form around.

Meanwhile, Jimmie, from who The Clockman peeled off to have virtually sealed the overall runner-up spot behind Indian Flame, appears determined to stage a rally, having differed in seven races this Saturday.

Jimmie is the only tipster to have kept faith with ABOGADO following the gelding's upset loss to 10-1 outsider SIR BUDGET last Saturday.

The Editor, the country's most dangerous sniper, has four other stand-alone selections as he aims to repeat his September-October $8,000 longshot victory after spotting KIRI at 11-1. He has SMOKIN PRINCESS in the first, STUNNER in the third, PRINCESS SHEMIKA in the fifth and SPROUTING WINGS in the nightpan.