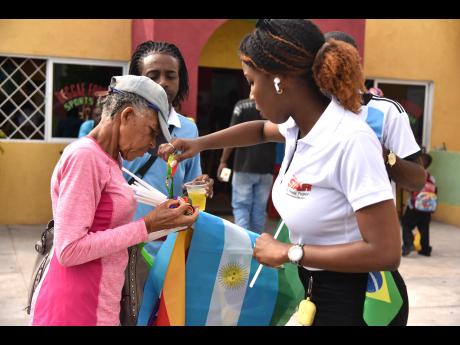 Peter Morrison is confident that Argentina will bounce back from their opening-game defeat to Saudi Arabia when they play CONCACAF giants Mexico later today.

The Albicelestes’ demoralising display in the curtain-raiser has placed doubts in the minds of their supporters worldwide.

However, the aspiring deejay who goes by the moniker 'Ilecvoice' or 'Mr Dungatown', is still confident that come December 18 the South American giants will lift the FIFA World Cup Trophy.

"Why cry for me Argentina?! Yuh affi remember good enuh, from the days of Maradona and Caniggia when wi beat Brazil inna di arena. Unuh see him yah, him a no dreamer, but remember wi a true believer. Hear mi nuh, mi no just bring Argentina, mi a bring Messi because when di match start it ago messy," exclaimed the rhyming self-professed life-long Argentina supporter.

"Mi remember when mi a youth enuh, and Maradona couldn't do it by himself and Argentina a play Brazil and (Claudio) Caniggia pick it up (the football) and beat bout four (players) and push it to Maradona, di 'Hands A God' general, and him score. So mi nah worry because Di Maria ago deh deh fi gi di general Messi," Morrison argued.

He said that he, too, was surprised by the 2-1 defeat to Saudi Arabia but expressed confidence that Argentina would still progress as group winners.

Morrison also said he believes that Argentina will face arch-rivals Brazil in the finals.

"I have no problem with Brazil, I just want to see them in the final, because this is a Messi final and wi never say semifinal. My son called me and say, 'daddy, please get me a jersey and get yourself one because I think Argentina's year is this year'. So I hope unuh hear because there is going to be no other year, Messi will be taking this one home."