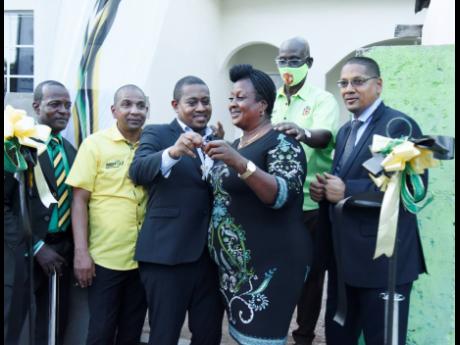 On Thursday, Julia Rogers experienced a pounding headache but she said her pain was triggered by excitement rather than stress, as the central Kingston resident received keys to her new two-bedroom house on Fleet Street.

Rogers' house is one of two units that were handed over as part of the Indigent Housing Solutions programme. The other recipients were siblings Lloyd Rowe and Juliet Cross of Barry Street. The initiative forms part of the Ministry of Local Government and Rural Development's Municipal Social Assistance Programme and is done in partnership with the Kingston and St Andrew Municipal Corporation (KSAMC).

"A lot of times I sat with my hands at my jaw and was fretting and when I see Donovan Williams [member of parliament for Central Kingston] he said 'Move yuh hand from yuh jaw man, yuh soon get yuh house man'. I big up God because the way di house did stay, I couldn't eat, I couldn't sleep. I couldn't stay in it because rain woulda come wet mi and I don't know how mi woulda manage. Who could it be but Jesus? I thank everybody in the house of parliament and everyone who has made this possible for me. A tru unno don't even know," Rogers said between tears.

Rogers said she had lived in a run-down two-bedroom board structure and was badly in need of assistance. She said when Williams offered to assist, she initially thought she would be given another board structure, for which she would have been extremely appreciative.

"It was messy when rain fall. When mi hear say mi a get concrete mi thank Mr Williams. Mi say 'Jesus, God is very good'. One day mi just see steel drop and mi have to thank God again. A central Kingston mi live all a mi life so mi really happy fi dis. Is three of us going to live here," she said.

To benefit from the programme, persons are encouraged to visit the Poor Relief Department of their parish's municipal corporation and complete the indigent housing application form. Eligibility is determined by the department following an assessment of the applicant's living conditions.

For Lowe and Cross, their former dwelling on Barry Street not only leaked whenever it rained, but was infested with rats.

"Di place did stay bad man. Di house use to leak, enuh, and rat use to take us up. Di place did old bad and we did have three-bedroom and a five a we did live. Mi feel good because mi mada can come back come live wid we. Mi life change fi nicer and better man," said Cross.

Minister of Local Government and Rural Development, Desmond McKenzie, said another three units will be built within the space in short order.

"I never like the board houses, so since 2016 we have incorporated the words social housing and we have moved away from constructing wooden houses to concrete one, two and three- bedroom structures right across the country. In the Corporate Area alone, we have constructed more than 40 units in Kingston and St Andrew. Here in central Kingston, we have started the journey with two houses and we have secured some funding for an additional three houses in the area. There is a need for serious social intervention in central Kingston," he said.