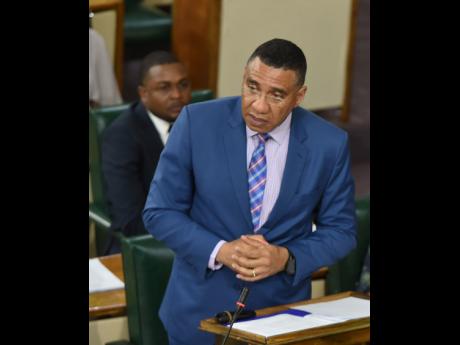 Prime Minister, the Most Hon. Andrew Holness, addresses the House of Representatives on October 5.

Providing an update in the House of Representatives on October 5, Prime Minister Andrew Holness, said three housing developers have already commenced construction of their respective housing scheme on the divested lands.

“It is expected that between them some 6,000 houses will be available in the near term, with the other developers expected to follow shortly. It is anticipated that the Greater Bernard Lodge will see the construction of some 15,000 new  housing solutions over the next five to eight years. The community will be complemented by a modern urban centre,” he said.

Prime Minister Holness explained that a unique feature of the divestment of the lands is that successful purchasers must pay an impact fee that will cover infrastructural development.

“This is a sort of development fee for building out the foundational carrying infrastructure that is water, sewerage, provisions for fibre optics, drainage, roads and green spaces. These fees are paid into a special-purpose vehicle that manages and executes the construction of the infrastructure to ensure quality and uniformity throughout the entire development,” Mr Holness said.

“Too often we have seen Government divest lands for housing development and the quality of the infrastructure is abysmal, if not nonexistent. Ultimately, the Government bears the cost to build out sewer treatment plants, lay water pipes and pave roads that developers ought to have done. In this development, we have ensured that the owners who will purchase their houses in the future do not suffer the discomfort of acquiring a property only to find that they have no sewer, their roads were not paved, though they were promised,” he added.

He said one uniformed high-quality standard will be undertaken for the infrastructural works.

“We are not allowing the developers themselves to do the infrastructure, because what you will find is one developer will say I can do it cheaper or I will do it to this standard; no, we want one uniformed type quality standard,” the Prime Minister emphasised.

He informed that though delayed by COVID-19 restrictions and bouts of inclement weather, construction is well advanced with the laying of water pipes and sewerage infrastructure.

“Potable water is already available to much of the development area. A five-kilometre highway will traverse the development from east to west and these works are currently the subject of an open tender. A flood mitigation plan has been designed and will be implemented on a phased basis,” he noted.

Mr Holness said more than 100 acres of land have been dedicated in the master plan as a retention pond.

“It is Government’s policy that the Greater Bernard Lodge Development should be inclusive; we are not just putting up lovely structures, we want to build communities of order, security, dignity, respect and fairness,” he added.