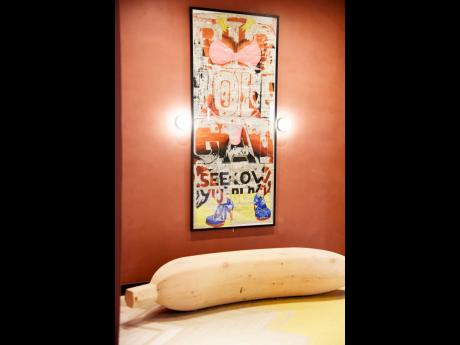 The controversial art piece in the ROK Hotel in downtown Kingston. 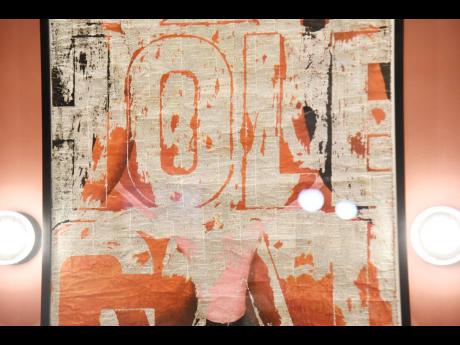 Bible verses are also visible in the artwork.
1
2

Representatives of Kingston's newest hotel, ROK, have sought to defend its decision to mount a provocative piece of art in its lobby.

The work, which the hotel said was done by former Edna Manley School of the Visual and Performing Arts student K. Khalfani Ra, has the slightly obscure words 'Big H*le Gal...See Ow You Black And' on what appears to be pages from the Bible. And as if not racy enough, the piece is mounted above a giant size banana, leaving little to the imagination. One visitor of the hotel, which was officially opened by Prime Minister Andrew Holness on July 19, described the piece as extremely offensive.

However, ROK, through its a representative Ellen Lynch said "We are showcasing art that illustrates and supports the vibe of downtown Kingston and the emerging arts district. This is reflected in the interior design." Lynch said that art is "one of the pillars upon which ROK Hotel proudly stands.

"We have positioned ourselves as an integral part of the artistic development of downtown Kingston, hence the curation of the ROK Collection has been strategic," she said.

Lynch, in quoting the artiste said "It is to critique the hypocrisy, contradictions and double standards prevalent in the society by presenting it with a damning reflection of itself." She said his work has sometimes been described as provocative and engaging with issues of blackness and history globally and locally. "He describes his work as "a martial exercise".

"The painting is simply Mr Ra's artistic expression," Lynch said. She also said that this was the first and only negative reaction to the piece, as local and international guests, as well as hotel staff, have expressed their admiration for the piece.

"ROK Hotel takes pride in female empowerment and upliftment and would not support content that would be demeaning to women. We also take pride in highlighting the unique creative expressions of our established and emerging Jamaican artists. As art is interpretive, people will always have a different perspective," Lynch said.

"This is why we have diverse pieces from many emerging and established artists such as Laura Facey, Kianne Patrice, a collection from Maxine Walters and Dion 'Sand' Palmer among many others," she added.

ROK Hotel, located on the corner of Ocean Boulevard and King Street, boasts state-of-the-art facilities including 168 rooms and 47 luxury suites, a lounge area, restaurant, cafe and bar, and 24-hour fitness and wellness centre.