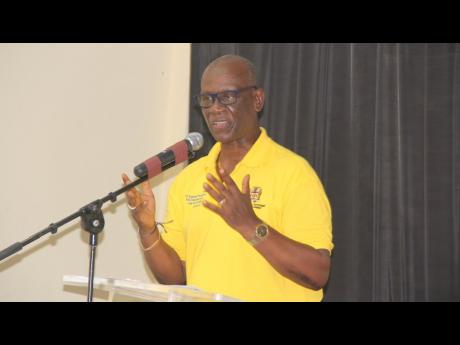 The spate of crashes on the nation’s roads has become extremely unpalatable and is fast escalating into a national crisis, says Minister of Local Government and Rural Development, Desmond McKenzie.

Mr McKenzie, who was speaking at a disaster preparedness town hall meeting in Runaway Bay, St Ann, on July 28, said the Government is very perturbed by the level of recklessness involved in many of the crashes, the wanton loss of lives and the effects these have been having on grieving families.

The Minister said the time is now ripe for a fully fledged public education campaign on road usage and urged residents to utilise the power of social media to both highlight and promote ways to prevent the carnage taking place on roads across the island.

"We are paying a severe price for this level of indiscipline that has taken over our roads. We are losing lives… mostly young men… and I am [deeply] concerned," Mr McKenzie said.

"The same way in which we use social media and other forms of information to be critical and raise concerns about [many other] issues, let us start a campaign in this country about the carnage on our roads and what we as Jamaicans can do and are prepared to do," he added.

Mr McKenzie also called on public transport operators to be more responsible in doing their part to reduce the frequency of road accidents and to protect both the country and the travelling public.

The Minister noted that members of the public also have the power to take a stance against travelling in vehicles that have shown a blatant disregard for road safety, arguing that if they refuse to take these buses and taxis, that will send a strong message to the operators.

Mr McKenzie’s address came after the recent spate of crashes, including a July 24 incident where a two-bus collision on the Llandovery, St. Ann, main thoroughfare resulted in the death of two persons.

Four days later, the number of fatalities had moved to four with approximately 18 persons remaining hospitalised.

“What is really sad is that this is a man-made disaster, which is affecting the country. The carnage on the roads is also resulting in the country losing much-needed revenue,” Mr. McKenzie said.

"The law alone can't help. When I listen to the number of persons in the hospitals, where surgeries must be put on hold, that is a cost to the country, loss of revenue, and loss of production. We are going to be taking this message right across the country," the Minister noted.