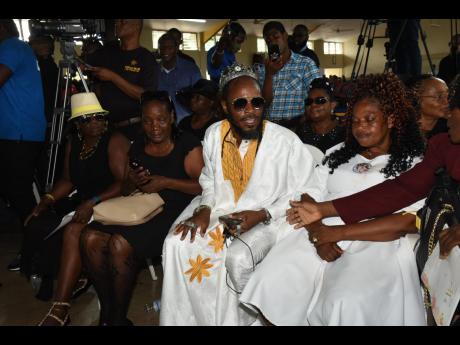 L.A. Lewis at the funeral of the Clarendon five.

L.A. Lewis said he was left disappointed when he did not get to deliver his planned speech at the funeral of the Clarendon five.

The funeral was being held for 31-year-old Kemesha Wright and her children: Kimanda Smith, 15; Shara-Lee Smith, 11; Rafaella Smith, five; and 23-month-old Kishawn Henry Jr. inside the Stuart Hall Auditorium at Clarendon College. They were killed on June 21 at their home in Cocoa Piece by a relative.

After the service Lewis accused officials of directing security to have him removed.

“The Maroon government was the first set of people to offer to bury Ms Gwen (referring to Gwendolyn McKnight, mother and grandmother of the deceased) grand pickney dem and we get bright light fi dweet,” Lewis told THE STAR outside the auditorium.

He said he helped to sponsor the nine night and was only giving comfort to McKnight when he took a seat beside her. He said he was told to move by officials.

"But Ms Gwen said alright just to avoid the argument just go over the other part,” he said.

"As a leader you afi tek criticism and you afi get ready fi when people try to put you down,” Lewis said, adding that he was not too concerned.

Despite his claim, Lewis was not among those listed on the funeral programme.