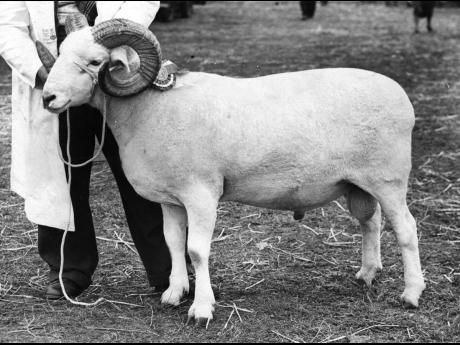 A sheep has been sentenced to three years in jail after it was found guilty of killing a woman.

The ram was arrested by police in South Sudan earlier this month after attacking Adhieu Chaping, who later died of her injuries.

Police chief Major Elijah Mabor said: "The ram attacked by hitting her ribs and the old women died immediately. So this is what happened in Rumbek East in a place called Akuel Yoi.

"Our role as police is to provide safety and separate fights. The ram was apprehended and currently under custody at a Police Station of Maleng Agok Payam."

Major Mabor also explained why the ram has been punished for the crime rather than its owner.

He said: "The owner is innocent and the ram is the one who perpetrated the crime so it deserves to be arrested then later on the case shall be forwarded to customary court where the case can be handled amicably."

The animal will now spend the next three years in a military camp in Aduel County headquarters in Sudan's Lakes State.

A dog owner has revealed an awkward exchange with a woman in the park when she asked him what his pet chug's name was, and she didn't like the answer.

He wrote on Reddit: "Eight years ago, I got a gorgeous chug and decided that the greatest name ever would be Askim.

"So when people ask me his name and I tell them, about 50 per cent of the time they'll awkwardly bend down and ask my dog it's name - it's hilarious."

The novelty soon wore off, and the man started to see the name as a "regular" word while everyone "just got used to" the moniker.

However, he continued: "I just moved into a new neighbourhood with a great park that has lots of dogs and very chatty regulars.

"An elderly lady asked Askim's name. She said 'what?' so I repeated myself and she turned to my dog and asked him his name.

"I quickly explained, but instead of getting the usual chuckle she became extremely upset and felt very humiliated."

He has since been approached by strangers claiming to have heard about "his joke" and insisted they "didn't appreciate pranks in a nice family park".

But the man added: "When going out, I'm not looking for new victims or inviting people to get tricked, and I wasn't trying to trick her.

"It was small talk and I didn't even think about it until I got a negative reaction.

"It's been pointed out that elderly people can feel really insecure about their diminishing faculties and I know from personal experience that it's very true."

A new study has claimed that spending lots of time on a console can increase the IQ of a child.

Researchers from the Karolinska Institutet in Sweden carried out tests on over 5,000 children in the US aged between 10 and 12 to examine their cognitive abilities.

The children and their parents were asked how much time the youngsters spent playing video games before the study was followed up two years later.

The results showed that kids who played more games than average increased their intelligence by around 2.5 IQ points more than average.

Torkel Klingberg, professor of cognitive neuroscience at the Karolinska Institutet, said: 'While children who played more video games at ten years were on average no more intelligent than children who didn't game, they showed the most gains in intelligence after two years.

"This is evidence of a beneficial, causal effect of video games on intelligence."

Aliens reportedly disabled nuclear weapons at a top-secret military base. Robert Salas, a former US military officer, has claimed that 10 nuclear weapons were taken out by extraterrestrials in 1967.

Salas claims that the incident was covered up at the time by government officials and is now determined to expose the case as he feels the authorities in the US are holding back on alien details.

Salas - who worked as a commander at Malmstrom Air Force Base in Montana - said: "Nuclear missiles were shut down by UFOs over the span of eight days and there are testimonies by witnesses.

"The primary witnesses, myself included, are still alive and able to give testimony about this incident. After the incidents took place, we were told not to speak about them. In other words, there was a cover-up. There's excessive secrecy surrounding the whole thing."