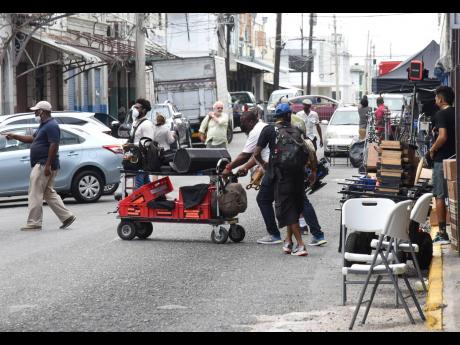 Film crew personnel preparing to shoot a scene of ‘Get Millie Black’ along a section of Harbour Street in downtown Kingston. 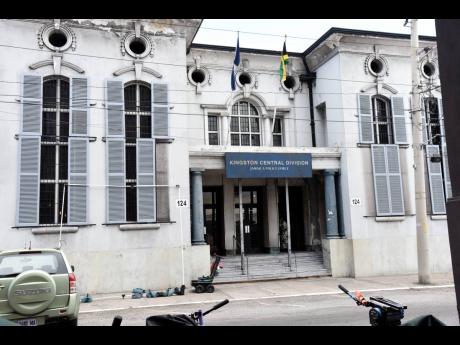 Some of the city’s grand buildings are captured in the filming.
1
2

Persons with business interests in downtown Kingston say they are looking beyond the traffic congestion associated with the production of the international series Get Millie Black as it will boost the capital city's commercial appeal in the long haul.

Since Saturday, sections of King Street and Harbour Street have been cordoned off by the police to facilitate the shooting of the six-part series written by award-winning Jamaican author Marlon James. But while production has caused a traffic headache for several motorists and pedestrians, it has served as an economic boost for small businesses. For Sheriana Whyte, co-owner and chef at Waah Gwaan Cafe along King Street, the production has offered her Jamaican-flavoured business an opportunity to impress some of the overseas crew members.

"We are experiencing an increase. The crew members love our products. We were open on Monday [Labour Day] for them. We don't usually open on Saturday and we did that for them and now we are open until 6 p.m. although our usual closing time is 4:30 p.m.," she said. "We are also excited to be witnessing and somewhat be a part of this one of a kind production, which will obviously bring more exposure to the city and country by extension."

Her sentiments were echoed by businessman Andrew Tai, who said he is anticipating a boom in business activity from the filming.

"Is a good thing fi wi. Number one, it is bringing income and two, it is giving us added publicity. As a matter of fact, the timing couldn't be any better given what has been happening in downtown Kingston recently. Mi born and grow downtown and Kingston is doing well right now. This is a big plus for us," he said. Tai also reasoned that the cost of real estate will increase once more of these events occur.

"I have real estate here and I am eagerly anticipating an increase in value for my properties. I don't mind the temporary inconvenience regarding the redirection of traffic because as you can see, there is a long-term benefit from this when you consider that two major television outlets are behind it," he added.

A motorist, who gave his name as Keith, was initially peeved after having to find a parking spot that was some distance from his destination. However, his displeasure quickly changed when he realised the source of the traffic congestion.

"Me a come in from Marcus Garvey Drive and traffic would a kill me fi reach down a tax office [King Street]. Me park inna the [Urban Development Corporation Car Park] on Pechon Street and say me ago walk it. But when mi come round and realise wah gwan mi feel better. Dis a something weh can only bring a positive spotlight to the city," he said.

The series, which will be jointly aired by the United Kingdom's Channel 4 and Warner Media's premium network HBO, will depict the work of an ex-Scotland Yard detective who returns to Kingston to work on missing persons' cases for the Jamaican police. James said that his mother, who was one of the first policewomen in Jamaica to be promoted to detective, was the inspirational source for the character Millie-Jean Black.