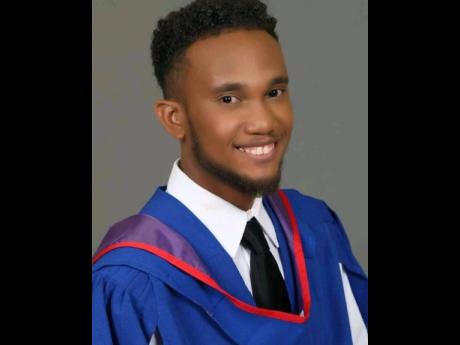 In between moans, sighs and a hoarse throat, the result of days of tears, Jennifer Reid spoke of her late son, Dr Brandon Dixon, as a high achiever.

A former Spelling Bee standout and top Blue Cross Scholarship recipient, Dixon was killed when his car collided with a truck along the Orange Bay main road in Hanover last Friday afternoon.

Pained by the death of a child who she described as having a brilliant mind, Reid said Dixon could point out pictures and symbols long before he could talk.

"Although he couldn't talk, when asked questions such as what colour is this, he would point them out to you," the mother of two told THE STAR before she broke down crying, asking her sister Beverly Reid to take over.

The 30-year-old medical doctor, who had aspirations of becoming a neurosurgeon, was the pride and joy of his family, who said that he was hungry for knowledge and unafraid of venturing out of his comfort zone. It was his leadership skills and academic prowess that spurred his teachers at Manning's School in Westmoreland to support his push for head boy, a position he served in from 2009 to 2010.

"When it was time for him to attend university, he did so well he received a Government scholarship affording him 50 per cent of his tuition," said Beverly. Not easily satisfied, Dixon did courses at Harvard University and received a scholarship to Edinburgh University in the UK.

"On the table here in the living room, there are books all over the place. This is a book that represents Brandon, The Seven Decisions: Understanding the Keys to Personal Success', by Andy Andrews. Zero to One, Notes on how to build the future, is another one," she said.

According to Beverly, Dixon was always trying to be the best and didn't accept mediocrity. She said that he pushed himself and his next move was to the UK this summer to do an exam as he pursued his neurosurgeon dream. His fees were already paid for the exam and his airline ticket had already been purchased.

As loved as Dixon was loved and admired at home, so was he in the field of medicine and Dr Kaushal Singh, senior medical officer for Hanover, described his death as a tremendous loss to not only the parish, but the country.

"He was very intelligent and hard-working, always research oriented. He was trying to work on wound care management," explained Singh. Dixon was a district medical officer in Hanover, where he had been stationed since the start of the year. Singh added that Dixon was the continuing education coordinator for the parish, and would organise webinars and clinical meetings for the doctors.

"He could have contributed to medical science, because his type of aspiration is rare," stated Singh. "He was one of the brightest among us. He had immense potential." Dixon was assigned to health centres across the parish in his role as a primary care physician.