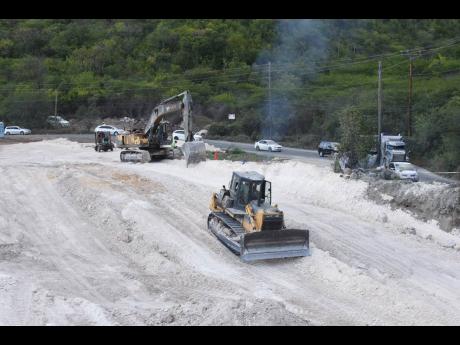 The construction on this section of the main road near to Grants Pen in St Thomas has become a problem for the residents. 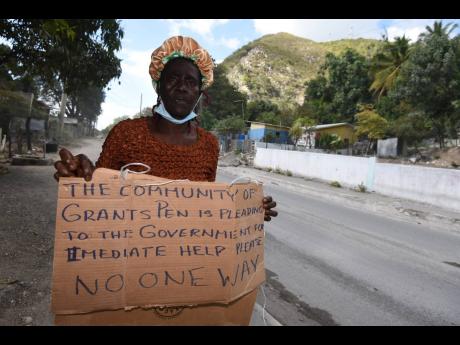 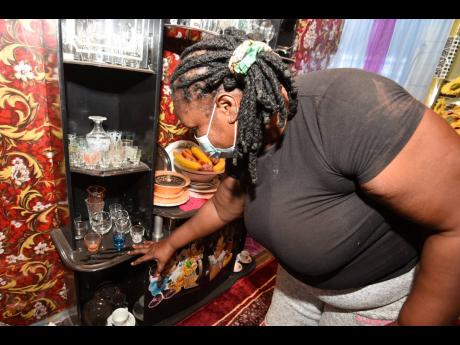 Jacqueline Davis shows the amount of dust that has ended up on her furniture, a negative side effect of the road construction.
1
2
3

The residents of Grants Pen in St Thomas say that very soon, they may become crocodile food as the imminent new highway that will bypass their community will force them to walk through an area that the reptiles call home.

Yesterday, they staged a peaceful demonstration to express their concern with the Southern Coastal Highway Improvement Project. Jacqueline Davis, a 59-year-old shopkeeper, said in addition to losing her sales, she is fearful of walking past the swampy area especially at nights.

"How we ago see we way inna crocodile area? The other night dem have party and the next morning one a dem come out on the road like him a look food because it look like him smell it from the night. It nuh safe to walk because the place full a crocs and mi nuh wah be dem food. The streetlights not working so is not like we ago see dem a night. So right now a lockdown the community ago under because we have to be inside by 7 p.m.," Davis said.

Grants Pen, a small community, is bordered on the east by the more developed Albion, where the four-lane highway will end. The highway's initial alignment plans, which were approved in 2018, had it following the existing main road past Grants Pen. However, following an amendment in 2020, the highway is being built on an elevated section that bypasses a section of the existing main road at the entrance to the community. The residents say that currently, the trek from the main road to their homes is very short.

"When dem block we off now we going to have to walk a mile because mi ago have to come off way down the road and walk come up and my legs dem nuh good. We nah go have nuh bread truck a come in because a the highway dem ago drive. What woulda take about two minutes to walk after mi come offa the bus may take hours," said Davis.

"A nuff time the bus and taxi driver dem woulda pass and buy a hot Dragon and a pack a peanut from mi but when dem make all a dem divert, a whole heap a business people deh here and dem ago suffer," Davis added. Dust from the ongoing construction is also a problem.

"Yuh see mi front room, is the powder room mi call it because it full a dust. Two days before Christmas mi say mi ago clean it out and when mi look in deh, mi just lock back the door. Dem water di place but it nuh really help. You would be shocked if yuh see how much medication mi have. Bare sinus problem mi have and mi never used to sick before," said Davis.

Her friend Beverly Morgan pointed to a bulge at the side of her leg. She told THE WEEKEND STAR that a past injury prevents her from walking properly.

Fitzroy Johnson said that while residents welcome the area's development, they do not believe that they should be 'penalised' for it.

"Is like they are taking us back to 40 or 50 years ago where yuh have to walk to your destination. We are used to going to our gate and take a car and now dem a stop that. How the old people dem ago manage? We are not going to rest until they address the matter," he said.

Communications manager at the National Works Agency, Stephen Shaw, confirmed that discussions have been ongoing with residents but insists that there is no better alternative.