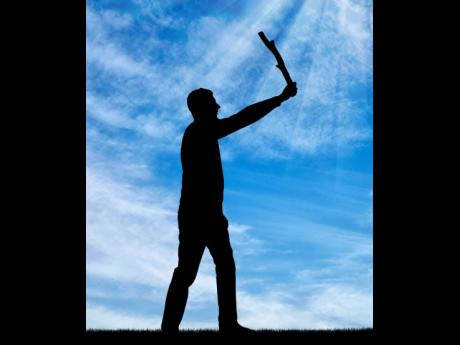 A man was remanded in custody yesterday after admitting to the Kingston and St Andrew Parish Court that he had hit his stepchildren with a stick.

Alphanso Campbell is charged with three counts of cruelty to a child and unlawful wounding. It was reported that one of Campbell's stepchildren went to the Denham Town Police Station and told them that he was beating their mother, who is the complainant. The police investigated and noticed that the complainant had a wound on her left hand.

It is alleged that she told the police that it was Campbell who inflicted the wound. It was further reported by the children that Campbell had beaen them. After hearing the allegations, Campbell pleaded guilty to cruelty to the children, but not guilty to unlawfully wounding the complainant. The children are ages 11, nine and four.

"One lick me give dem and tell dem gwan a dem yard. Is a stick me use, sir, a likkle piece a stick me use and gi dem one, one lick," Campbell told the court.

Under Section 9 of the Child Care and Protection Act, persons found guilty of cruelty to a child can be fined up to $3 million or face imprisonment up to three years at hard labour.

Hearing his explanation, Chief Parish Judge Chester Crooks imposed a fine of $50,000 on each count or six months' imprisonment. The sentences are to run concurrently if the fines are not paid. After the judge imposed the fine, Campbell became irate.

"Well maybe you need to think twice before beating children with a piece of board," Crooks replied. A fingerprint order was made and he was remanded in custody on the charge of unlawful wounding.

Campbell is expected to return to court January 5, 2022.