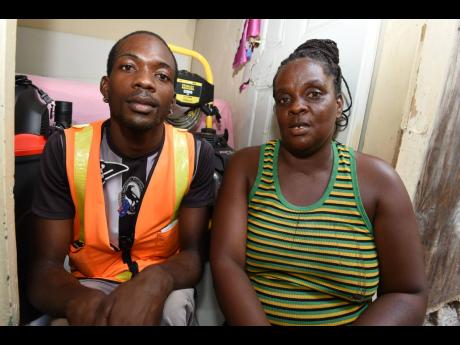 Diane Moodie expresses her delight with the assistance given to her son, Raheem Williams, after his story was published in the STAR publication. 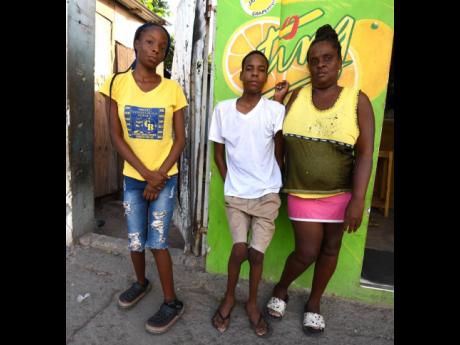 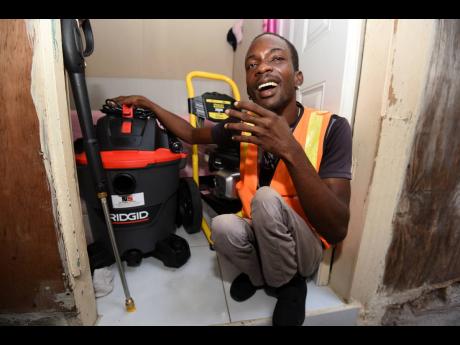 Raheem Williams has been gifted with a power wash machine and a vacuum cleaner by STAR readers. The 27-year-old, who has a disability, plans to start his own car wash business in Kingston.
1
2
3

As tears trickled down the cheeks of Diane Moodie, she made her plea vocal: "The only thing me woulda want right now is for my children to walk."

Moodie is a mother of six, three of whom have physical disabilities. Her firstborn, Raheem Williams, was recently featured in THE STAR, appealing to readers to assist him in transforming his life by purchasing equipment to open a car wash and detailing business.

Williams, 27, has a disability - though not diagnosed - that affects his ability to stand upright. This, however, has not deterred him in his quest for work for a honest living. Williams, who is employed as a sideman on a pick-up truck, doing deliveries from the Kingston Wharves, gets around by walking on his hands.

Two of her other children, Renee Collins, 20, and 16-year-old Dwayne Collins, are unable to stand upright. Moodie also suffers from a similar condition and she believes that it is hereditary, as her father also suffered from it.

Williams' condition is the most severe.

For Renee, her disability does not impede her daily activities. Having secured a job in a wholesale in downtown, the third of six children said she has learnt to accept her disability and has grown even more confident with it.

"I don't really allow it to bother me, because my mother always tell us not to think negative about it. It's really not a bother to me and me nuh feel nuh way about it," Renee expressed.

Similarly Dwayne, a student of Pentab High, has learnt to accept his disability, regardless of its unknown nature.

Crouched on the ground, but held sturdy with a broad smile, Dwayne told the news team that he was subjected to bullying and abuse while a student at the Maxfield Park Primary.

"Me used to feel a likkle way about it yes. They used to bully me. But I never make it be a problem to me, because my mother always say me shouldn't make it bother me. Now, I just focus on school, I don't really listen what nobody else has to say," Dwayne added.

The mother of six was evidently emotional as she spoke about the strange situation her children have been subjected to.

"When me see Raheem born, me see how the ankle twist and me tell the nurse. She say to me to turn him over to Bustamante. After that, me pray every day to God and beg him say to make the other one dem come normal. The second one, Derval, when him born, me look pon the ankle and me see seh it look normal and me seh, 'Alright then, me happy bout it'. As dem born, me always turn and look pon dem foot, fi see the twist in dem foot. Me try again and get Renee and look pon her ankle and see how it turn," Moodie said, shaking her head.

Witnessing the misfortunes of her children, added to the fact that their condition has not yet been diagnosed, has been a difficult pill to swallow for Moodie. But she made it her duty to instill a spirit of happiness in her children.

"Me pray to Father God and beg Him to help me with them because me did really stress out with Raheem. When Renee born, me look and say, 'So me really a guh have dem pickney here, and all a dem a guh walk like me?' Dat me a seh because me nuh want that for them. By time Dwayne born (four years after Renee), me just work with it 'cause I would've known how to deal with it (the disability) and how to care for them," Moodie explained.

STAR readers have fallen in love with Williams. He gets around by walking on his hands and is determined to open a car wash and detailing business.

His plea for assistance has been answered by donors who provided him with funds which he has used to purchase power wash and vacuum machines.

"People find the story motivating and they say they want to help me out. I just want to say thank you for helping to sponsor me towards it because now me can do my own thing. I am very appreciative," Williams said with a broad grin.

Moodie is excited by the fact that the first-born has been determined to succeed despite his disability. She said that, the moment she saw him at birth, she knew that he would be faced with an uphill climb.

"When me have Raheem, me see it [the deformity]. Me see it in him foot and me say, 'Doctor, this likkle boy a guh walk like me'. She say how me know, and tell her to look how him foot turn. Me carry him go Children's [Bustamante Hospital for Children (BHC)], him get a brace and then him pass children age. Me carry him go UC (University Hospital of the West Indies), a dem say dem can't help him, me don't know why. Me carry him go Mona Rehab and get one iron shoes for him and, from him get the iron shoes, him get like this and start [walk] pon him hand in 1994," the mother shared.

She reflected that, while Williams was a patient at BHC, he underwent several sessions of physical therapy. However, his condition worsened as doctors could not diagnose it.

"Dem can't find out what is wrong with him because it come from me. Dem nuh tell me what me have, but you see my father, him have a turn foot. Me have it, my daughter have it, Raheem have it and my other son have it. And dem get it from me. The only thing is, I don't struggle as much as they do," she said.

Moodie told THE STAR that, in raising her children, she ensured that she spoke positively to them and encouraged them to embrace their disability, even if they were viewed as 'different'. The 46-year-old said that she does not allow her disability to dampen her spirits, given that she has witnessed persons living with worse conditions.

The agony she endured while taking care of Williams was recently replaced with jubilation as she beamed with pride at seeing Williams making moves to cement his independence.

"Right now, me feel good about the help him get. I am proud and is a long time him want the help to walk. Nobody nah really hire him fi work [because of the disability] so me tell him that him can go seek help. I am happy to see how everybody tried to help him. I want to see him go further and me want my other children to get a chance to walk properly," she told THE STAR.