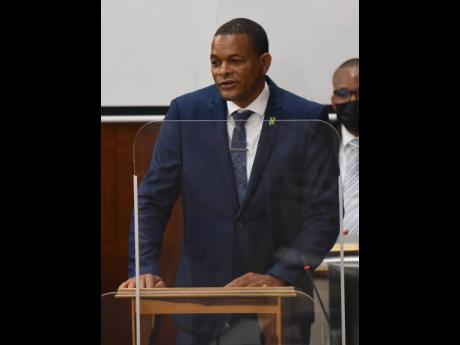 "I cannot afford to be that MP who just talks and makes wild promises," Dave Brown, the member of parliament for Hanover Eastern has said.

The second-term representative, while speaking in the State of the Constituency Debate on Wednesday, lamented the impact of the bureaucracy on his ability to get things done in the constituency. He pointed, for example, to a project of the Rural Electrification Programme that was initiated in Kerr's Town, New Milns, and other communities in 2018 that remains in gestation.

"That initiative was short-lived and remains at an unfortunate standstill. This is a sore point and has become very embarrassing for me. Assessments were carried out and work began but this was halted in 2018," Brown said.

"In this time when we wrestle with crime, we must realise that people's lives remain threatened and insecurity heightens when roads, lanes, communities remain in darkness. Dark spaces become a haven for criminals. I cannot afford to be that MP who just talks and makes wild promises. If it were singularly up to me, there would be no community that remains in darkness in Hanover Eastern," Brown said.

"The people are expecting us to deliver on this promise and I am in full support of this," he added.

Another area of concern for the member of parliament is the slow pace at which road works are being undertaken. For example, he said that commitments to rehabilitate the Hopewell to Cacoon Castle roadway was given in 2017, but it is yet to happen.

Another project is the rehabilitation of the Chi-Chester to Golden Grove road which he said was put to tender in 2017, but the bidding was aborted due to low tender.

"The National Works Agency has failed to give an update on the progress. The road is heavily traversed and is, in fact, the second most important road in Hanover Eastern," Brown said, adding that too many projects are stuck in the procurement phase.

"The procurement process should not serve or create an impediment to work that is urgent. We must think of the time value of money and also the hundreds of lives that are impacted by delays due to procurement," the MP said.