Blackman wanted one last look at man he ordered killed 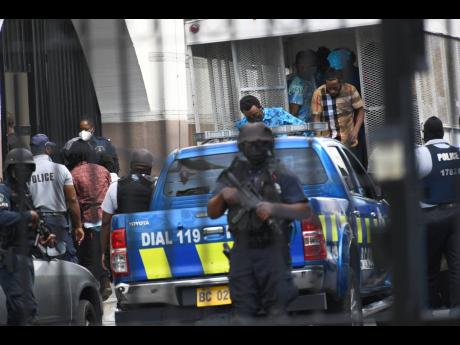 Alleged members of the Clansman gang being escorted to the Home Circuit Cout in downtown Kingston for their trial on Monday.

A former gangster turned State witness yesterday testified that Andre 'Blackman' Bryan, the reputed head of the One Don faction of the Clansman gang, laughed after being told that a man he ordered killed had been executed.

The self-confessed member of the One Don gang, who is the first witness to be called in the trial of the 33 alleged gang members made the revelation yesterday in the Home Circuit Court.

The witness testified that the alleged shooter, who he identified as Tareek James, otherwise called CJ, was Bryan's bodyguard, and that the man was killed on the alleged leader's instruction.

The victim, who has been identified only as 'Outlaw', was gunned down in a mid-morning attack in November 2017 while selling phonecards. The killing took place in Lauriston, St Catherine, in 2017.

The witness said the alleged gang leader had requested to see the man before he was killed, and spent five minutes looking at the man from a distance before the attack. The witness did not say whether or not he knew what was behind Bryan's request. However, he said that after he had taken the alleged gangster boss to look at the man, and was driving away from the area, Bryan started laughing when he heard shots being fired.

The witness said that shortly after he received a call and told the reputed leader that the man was killed and "He continue to laugh."

The court further heard that shortly after, Bryan was in a rush to return to his uptown apartment, located off Shortwood Road in St Andrew.

However, before returning home, the witness testified that he stopped to purchase KFC for James who had called and made the request.

When he arrived home with the food, the witness said James, who had been staying at his home for a couple of weeks, boasted about the shooting.

"He was telling me that him shoot Outlaw couple times," the witness recollected.

Bryan and 32 others are being tried on an indictment with 25 counts under the Criminal Justice (Suppression of Criminal Organisations) Act and the Firearms Act, to which they have pleaded not guilty.

The prosecution is alleging that the One Don gang carried out a range of murders, conspiracies to murder, extortion, and arson throughout St Catherine between January 1, 2015, and June 30, 2019.

The witness will continue his evidence today.