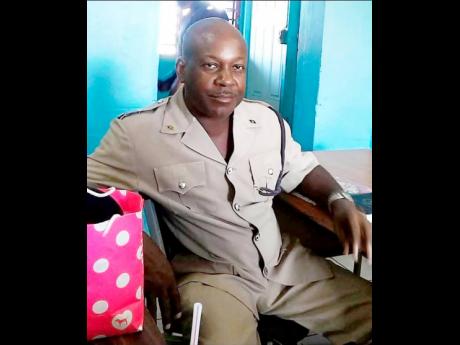 The Police High Command has expressed condolences to the family, friends and colleagues of Inspector Michael Brown of the Hanover Police Division, who fell ill on duty and died suddenly yesterday.

About 12:30 p.m. Brown was the shift commander at the Lucea Police Station when he suddenly became ill and was transported by ambulance to the Noel Holmes Hospital. He died shortly after his arrival. Brown was reportedly in the middle of a jovial conversation, when he suddenly appeared to suffer a seizure. His colleague and friend, Sergeant Michael Spence, was sitting across from him.

Were laughing and talking

"We were laughing and talking and suddenly he started having what looked like a fit, and he went down on the ground. I held him, talking to him, asking if he was okay," Spence said. "It hurts me so much knowing I was the last person who was with him when he died. I was talking to him, checking him, but got no response," said Spence. Efforts to revive Brown proved futile, said Superintendent Sharon Beeput, commander of the Hanover Police Division.

Brown, who served the force for more than 30 years, served in three of the four police divisions in Area One - Westmoreland, St James and Hanover. The divisional headquarters was a sad place on Tuesday. Among those present were Dexter Dennis, deputy force chaplain with responsibility for Area One, and Deputy Mayor Andria Dehaney-Dinham.

Inspector Mervin Hodges, head of operations, to whom Brown reported to directly, said he had spoken with the late lawman five minutes before he passed away.

"The team is grieving, but by the strength of God we hope to overcome," he said.

Hodges says his sojourn with Brown started while he was a young policeman stationed in Westmoreland. "He was a disciplinarian, always had the right words. He was respected by all members of staff. As a shift commander, we looked forward for his relief on time and his communication throughout the times," said Hodges. Brown is survived by his widow and children. The Force's Chaplaincy and Welfare Units are providing support to Brown's family members and colleagues.