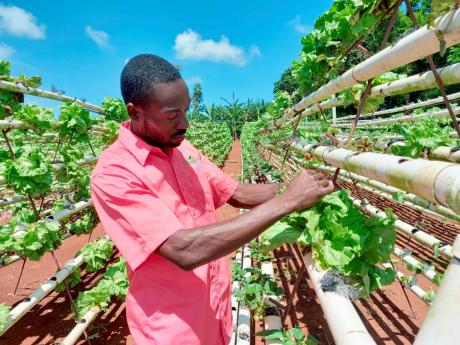 Ricardo Chambers on his farm in Swaby’s Hope, Manchester. 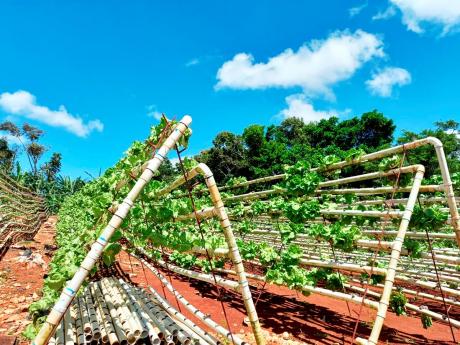 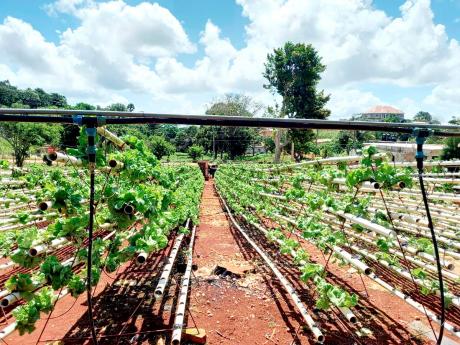 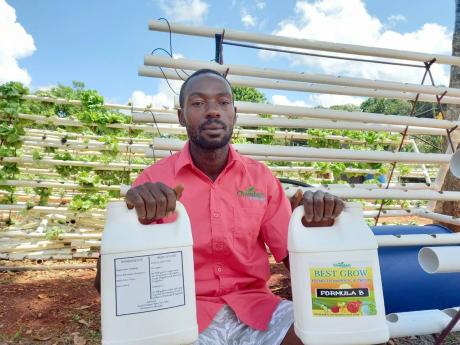 Chambers with specialised fertilisers produced by his company. 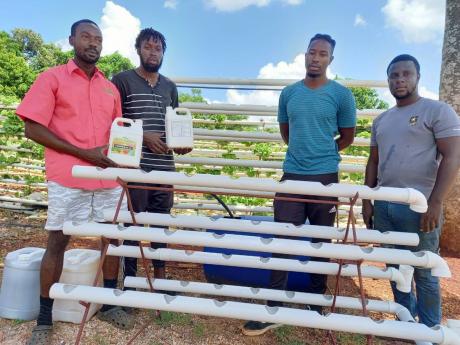 Following his successes as a 400m runner, representing Jamaica across the globe, Olympian Ricardo Chambers now has his eyes set on revolutionising agriculture through hydroponic farming.

Chambers, the CEO and managing director of Chambers Hydrofarm located in Swabys Hope in Manchester, said he became invested in the sector three years ago and wishes to impact the Caribbean.

"I chose hydroponic farming (growing plants without soil) after doing research and looking at the problems we face here in Jamaica and other countries. It was a no-brainer, I said this is the easiest type of farming currently available," he said.

Though he grew up in a farming community in Trelawny, and later migrated to Florida in the United States of America where he was also exposed to farming as a youngster, Chambers said he had to learn the rigours of farming through first-hand experience.

"It's capital intensive because the things are not cheap and it requires some technical knowledge to set this up. But I learnt how to build the system and manage the system over time. I took a trip to Tampa, Florida, to see and get a better understanding of hydroponic farm. I later set up 10 pipes at the back of my house and I started growing. When I figured things out, I came back to Jamaica and dived in."

He added: "When I started out, it took me three months to set up the farm, but that was because I was experimenting, trial and error. But recently I pulled down the whole thing and redesigned the farm and it took me about three weeks."

On 15,000 square feet, Chambers grows lettuce and strawberries, which he said were previously supplied to the hotel industry. However, since the pandemic and a significant reduction in orders, Chambers said he is now focusing heavily on agro-processing and providing technical services.

"We are trying to make this easy and accessible to anyone who wants to do farming in Jamaica. We provide products and services to help other people who want to do the same thing that we are doing. We build the farm, provide consulting services. For you, we teach you how to build the system and grow the plants and we provide premix nutrition."

He said that the company would be expanding its footprint in the agricultural sector.

"I am looking at how I can get our small farmers to start planting and growing more and modernising their way of production. I stepped away from track and field and everything else to do this," he said.

As part of his initiative to sustainably uplift the community, Chambers said he has started a youth group in Swabys Hope, which sees members actively involved in the agricultural process.

"We are also a part of a distribution company called Quality Harvest. We are creating an ecosystem from the sea, all the way to the end user. We want to be a part of the entire value chain," Chambers said.