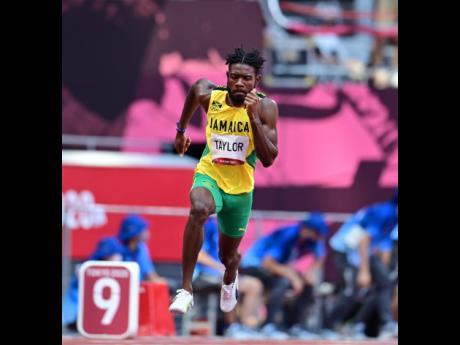 Jamaica's Christopher Taylor competing in the Men's 400m event at the Tokyo 2020 Olympics Games at the Tokyo Olympic Stadium in Tokyo, Japan on Sunday morning.

Olympic debutants Christopher Taylor and Demish Gaye have both qualified for the semi-finals of the Men's 400m event at the Tokyo Games in Tokyo, Japan on Sunday morning.

Taylor ran a time of 45.20 seconds to place third in his heat and take an automatic qualifying spot behind the USA's Michael Cherry (44.82s) and Barbados' Jonathan Jones (season's best 45.04s) who were first and second respectively.

Demish Gaye finished fourth in his heat in 45.49s, and qualified for the semi-finals as a fastest loser.

Former national champion Nathon Allen also competed but was eliminated after finishing fourth in his heat in 46.12s. That heat was won by Bahamas' Steven Gardiner (45.05s) with Trinidad and Tobago's (T&T) Deon Lendore (45.14s), and the Netherlands' Jochem Dobber (45.54s) third and fourth respectively.