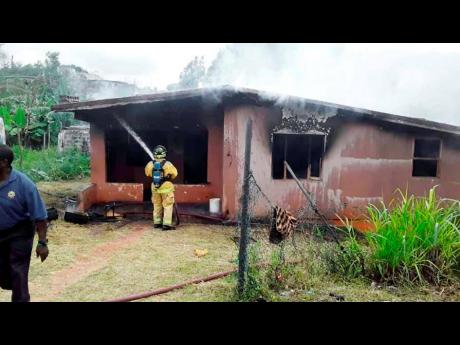 A firefighter conducts cooling-down operations at the house once occupied by Hyman. 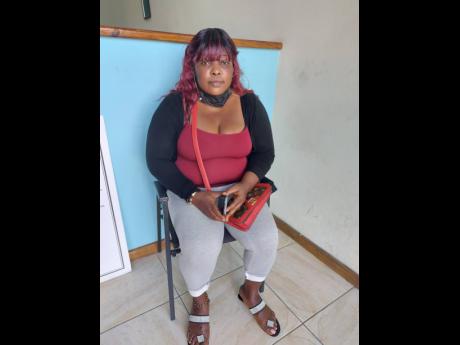 After spending only two months in a home she had moved into on the outskirts of Mandeville, Manchester, with plans to continue building on her skills and sustaining herself, Peaches Hyman lost everything in a fire.

The September 2020 ordeal, according to Hyman, left her devastated and struggling to make ends meet. Six months later, there is no difference, as the pandemic, she says, has made her efforts of regaining her footing near impossible.

"I lost everything in the fire. When I say I lost everything, I lost everything. Absolutely nothing was saved ... And in the midst of COVID, it made nothing easier," she said. Recalling the fire, Hyman said it was an ordinary day that quickly took a turn for the worst and changed her life forever.

"I was at the house with my niece at the time and my son was with my sister. I was talking on the phone with my mother and I smell something burning," she said.

Hyman, 42, said she got up immediately and began unplugging all the appliances in the house, fearing that something electrical was about to cause a fire.

"But just as me finish plug out everything, I saw thick smoke coming through the side of the wall and same like how me see the smoke, me look outside and it was dark," she said. Startled by what was unfolding, Hyman said she panicked and ran out of the house barefooted.

"I was so frightened I didn't realise that I run out leave everything in the house, my phone, my handbag, everything, and everything burn up. I only had the clothes on my back," she said.

Since then, Hyman said she has been bouncing around, staying with friends, but has no set home base. The former bar owner and bartender said that she has tried everything to get back on her feet, but has been challenged on every side.

"I had no money to start over ... each time I get a little help it was just enough to get some of the basic items that I lost," she said. Hyman told THE STAR that she has not been able to restart her business or secure employment to sustain herself.

"I would like help with a little structure ... I didn't get any subjects and I was going to HEART to get them but that became difficult because I was trying to earn a living. I would appreciate a little work, or something to help to get back on my feet again," she said.