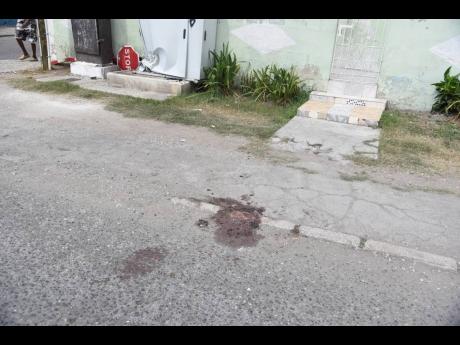 Blood stains the sidewalk where three men were shot in Arnett Gardens on Monday afternoon.

With a red bandana clutched tightly around her stomach outside her home on Colllie Smith Drive in Arnett Gardens, Marjorie Thompson clutched her belly and her side and cried out to Jesus for strength.

The grieving mother said she has been in pain since her 23-year-old son Steven Beckles, more popularly known as 'Mashie', was killed in a drive-by shooting on Ninth Street in the community on Monday. She said she was close to home when the gunshots rang out and instantly got a gut feeling that her son's life was in danger.

"When mi go down there, mi see mi son lay down on him face. Mi look at him and see like him hand bruk and mi say, 'Yea Beckles, a it dis'," she said.

Another man, Tyree 'Iron Man' Montaque, was also killed, while another has been admitted to hospital.

Reports are that at 5:15 p.m., Montaque, Beckles and another man were walking along the road when they were pounced upon by armed men travelling in a motor car who opened fire, hitting them. The police were alerted, and they were taken to hospital where Beckles and Montaque were pronounced dead and the other man was admitted for treatment.

Yesterday, huge clots of blood, shattered glass and a damaged utility box were observed at the spot where the deadly incident took place. Thompson said her son had reported to the Trench Town police as a condition of bail, minutes before he was attacked. She described him as a well-mannered young man who was respected by everyone in the community.

"Him is a youth whe always a take likkle pickney and teach dem. Every old people love and respect him. Him would a have him last and feed people. Mi son was a good son," she said.