Protective gear for medical workers in the US running low again 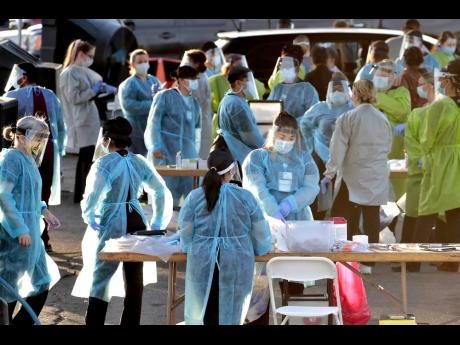 In this June 27, 2020, file photo, medical personnel prepare to test hundreds of people lined up in vehicles in Phoenix's western neighborhood of Maryvalefor free COVID-19 tests organized by Equality Health Foundation, which focuses on care in underserved communities. The personal protective gear that was in dangerously short supply during the initial weeks of the coronavirus crisis in the U.S. is running out again as the virus resumes its rapid spread and the number of hospitalized patients climbs. (AP Photo/Matt York, File)

(AP) - The personal protective gear that was in dangerously short supply during the early weeks of the coronavirus crisis in the U.S., is running low again as the virus resumes its rapid spread and the number of hospitalized patients climbs.

A national nursing union is concerned that gear has to be reused.

A doctors association warns that physicians’ offices are closed because they cannot get masks and other supplies.

And Democratic members of Congress are pushing the Trump administration to devise a national strategy to acquire and distribute gear in anticipation of the crisis worsening into the fall.

“We’re five months into this and there are still shortages of gowns, hair covers, shoe covers, masks, N95 masks,” said Deborah Burger, president of National Nurses United, who cited results from a survey of the union’s members.

“They’re being doled out, and we’re still being told to reuse them.”

When the crisis first exploded in March and April in hot spots such as New York City, the situation was so desperate that nurses turned plastic garbage bags into protective gowns.

The lack of equipment forced states and hospitals to compete against each other, the federal government and other countries in desperate, expensive bidding wars.

In general, supplies of protective gear are more robust now, and many states and major hospital chains say they are in better shape.

But medical professionals and some lawmakers have cast doubt on those improvements as shortages begin to reappear.

The American Medical Association wrote to the Federal Emergency Management Agency, Vice President Mike Pence and members of Congress calling for a coordinated national strategy to buy and allocate gear.

Although all U.S. states and territories have received some protective gear from FEMA, an Associated Press analysis of the agency’s own data found that the amounts varied widely when measured by population and the number of confirmed COVID-19 cases.

Many states say the federal supplies make up a small part of their stockpiles after they spent millions of dollars to acquire equipment on their own.